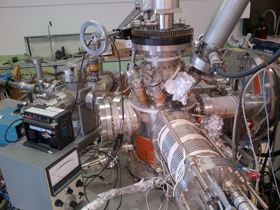 WASHINGTON, D.C. Oct. 25, 2013 — Every day, all day, our DNA gets beaten up by chemicals and radiation — but remarkably, most of us stay healthy. Now, an investigation by a team of French and Canadian researchers has produced insights into a little-studied but common radiation threat to DNA: low-energy electrons (LEEs), with energies of 0-15 electron volts.

The team has devised the first rough model of a close DNA cellular environment under threat from LEEs, revealing for the first time their effects on DNA in natural, biological conditions. Their work appears in The Journal of Chemical Physics, which is produced by AIP Publishing.

The team’s work is an important step forward in understanding how LEEs injure DNA because it provides a realistic experimental platform for analysis of results. The goal is to use this knowledge to improve current uses of radiation, such as in cancer treatments.

“The way by which these electrons can damage DNA, and how much damage they inflict, quantitatively, is of major importance not only for general radiation protection purposes, but also for improving the efficiency and safety of therapeutic and diagnostic radiation therapy,” said Michel Fromm, the lead researcher from Université de Franche-Comté in Besançon, France, whose expertise is in creating nanometer-scaled DNA layers. His co-author on the paper is Leon Sanche, of Sherbrooke University Québec, Canada, who is one of the world’s leading authorities on LEE research.

The team explored specific features of a small DNA molecule called a plasmid on a specialized thin film they created, which was irradiated by an electron gun. The impact produced transient particles called anions, which dissociate into “pieces” of DNA. When analyzed, these molecular fragments provide insight into the mechanisms of DNA strand breaks and other DNA injuries that health researchers seek to understand, repair and prevent.

“The fascinating point is that each time the close environment of DNA changes, new mechanisms of interaction of LEEs appear,” Fromm said.

Dissociative electron attachment to DNA-diamine thin films: Impact of the DNA close environment on the OH- and O- decay channels