New work on the interactions between superconductors and ferromagnets bridges the gap between theory on the long-range magnetic proximity effect and recent experimental results.

An international team of researchers recently revealed a general mechanism of the long-range electromagnetic proximity effect in SF structures in Applied Physics Letters, from AIP Publishing. They explain that SF interactions led to a strong spread of stray magnetic field to the superconductor from the ferromagnet. The group’s findings could help determine why ferromagnetic films transferred magnetic fields to their corresponding superconductors at distances longer than theoretically predicted.

“We expect our work will not only explain the existing puzzling experimental data on electrodynamics of superconductor-ferromagnet structures but also will provide the basis for the analysis of electrodynamics of any device of superconducting spintronics,” Alexander Buzdin and Alexander Mel’nikov, co-authors of the paper, said in a joint statement.

Magnetic layers are used in spintronic devices to change and read the spin signals of an electron in an adjacent conducting material. In extremely low-temperature superconducting spintronics, bound electrons, called Cooper pairs, penetrate the ferromagnet layer. This in turn accelerates superconducting carriers to induce a current in the superconductor. 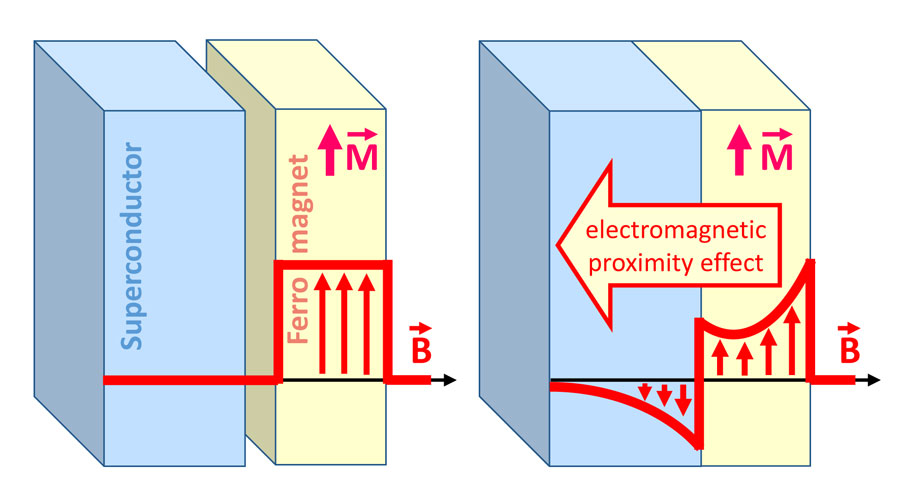 Scientists previously thought that the interplay between the system’s superconducting and ferromagnetic components occurred solely from superconducting Cooper pairs penetrating into the adjacent ferromagnet. Buzdin explained how in the case of normal, nonsuperconducting metal, for example, the spread of the magnetic field in the opposite direction from the ferromagnet into the metal layers is possible only at the atomic length scale. “For a superconducting material, it was believed that the scale of this spread [small] is of the order of the size of the Cooper pair, about 10 nanometers,” said Buzdin.

Recent experimental results by other groups, however, showed a magnetic field could be present in the superconductor at distances one order of magnitude greater than expected. To start solving this puzzle, the group modeled a SF bilayer system before and after its superconductor and ferromagnet components came into contact. They found that screening currents accompanied the penetrating magnetic field, whereas these stray fields are absent in the superconductor’s normal state.

Themagnetic vector potential, which is commonly used to describe the local magnetic field, was the only non-zero electromagnetic characteristic in the region of the stray fields in the superconductor. The vector potential is generally not observable in a normal metal in these conditions. This led Buzdin and his colleagues to conclude that the penetration of Cooper pairs into the ferromagnet through the direct proximity effect is responsible for supercurrent flow inside the ferromagnet and the resulting appearance of the compensating supercurrents that generate magnetic fields inside the superconducting component.

The team plans to further study the electrodynamics of SF structures and use their findings to one day create new types of spin valves, which can be used in magnetic sensors and computer memory devices.

Russian Academy of Sciences and University of Bordeaux