A team of researchers have developed a new method to investigate the link between interstitial fluid flow and brain tumors.

WASHINGTON, D.C., July 3, 2018 — Interstitial fluid transports nutrients and removes waste between the organs and tissues in our body. In the brain, interstitial fluid is thought to be composed of circulating cerebrospinal fluid, cellular waste and blood plasma, and past research has shown a link between interstitial fluid flow and an increased invasion rate of glioblastoma, or brain tumor, cells. A team of biomedical researchers and electrical engineers from the University of Virginia and Virginia Tech recently developed a new method to measure and reconstruct interstitial fluid flow velocities in the brain.

This method gives researchers a first look at interstitial fluid flow dynamics in glioma models, and the technique can readily translate to clinical models already using contrast-enhanced magnetic resonance imaging (MRI). The team describes their method in a special issue focusing on the “Bioengineering of Cancer” in APL Bioengineering, by AIP Publishing.

The team built on an existing dynamic contrast-enhanced MRI technique that’s already frequently used in clinics to track tumor growth and movement. “We are excited about our technique because we could potentially translate it to patient data that already exists and look at interstitial fluid motion in those patients,” said Jennifer Munson, a lead author on the paper.

Munson touted the team’s rigorous validation approach in silico and in vitro. First, the team developed an in vitro model of interstitial fluid flow moving through extracellular space by placing fluid on top of a hydrogel and using MRI to measure how the fluid flowed from top to bottom. Then, they validated their computational model against their experimental measurements. 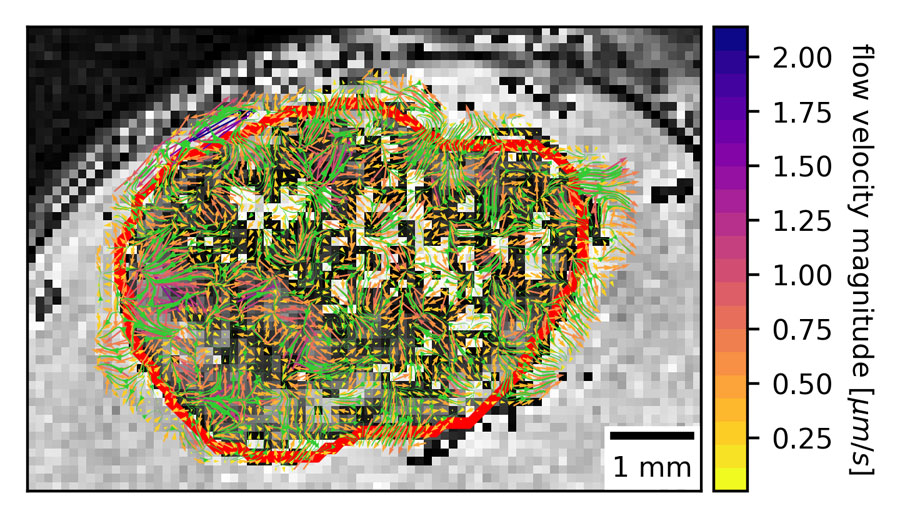 To further validate their technique, Daniel Abler and Russell Rockne, who are co-authors on the paper, created phantom fluid “flow field,” in a computer and then reconstructed that flow using their new imaging methodology. Finally, the team implanted patient-derived glioma cells in mice and examined the mouse tumors using MRI to visualize a real flow field.

The team was surprised to find high variability in the flow’s rate and magnitude. “There’s been this classical idea that a tumor develops and there’s this equivalent flow rate going out in all directions like a sphere,” Munson said. “Our method and our visualization approach and modeling show that that’s a large oversimplification and we have a very heterogenous system. Sometimes flow is going out, or in, or along the side.”

One day, this technique could potentially help researchers predict how a tumor might grow and, therefore, improve cancer treatments. More immediately, the team plans to use their established method “to understand the relationship between the fluid velocities and the growth of the tumors,” Munson said.

University of Virginia and Virginia Polytechnic Institute and State University