The flexible photovoltaics, made by researchers in South Korea, could power wearable electronics.

WASHINGTON, D.C., June 20, 2016 — Scientists in South Korea have made ultra-thin photovoltaics flexible enough to wrap around the average pencil. The bendy solar cells could power wearable electronics like fitness trackers and smart glasses. The researchers report the results in the journal Applied Physics Letters, from AIP Publishing.

Thin materials flex more easily than thick ones — think a piece of paper versus a cardboard shipping box. The reason for the difference: The stress in a material while it’s being bent increases farther out from the central plane. Because thick sheets have more material farther out they are harder to bend.

The researchers made the ultra-thin solar cells from the semiconductor gallium arsenide. They stamped the cells directly onto a flexible substrate without using an adhesive that would add to the material’s thickness. The cells were then “cold welded” to the electrode on the substrate by applying pressure at 170 degrees Celcius and melting a top layer of material called photoresist that acted as a temporary adhesive. The photoresist was later peeled away, leaving the direct metal-to-metal bond.

The metal bottom layer also served as a reflector to direct stray photons back to the solar cells. The researchers tested the efficiency of the device at converting sunlight to electricity and found that it was comparable to similar thicker photovoltaics. They performed bending tests and found the cells could wrap around a radius as small as 1.4 millimeters. 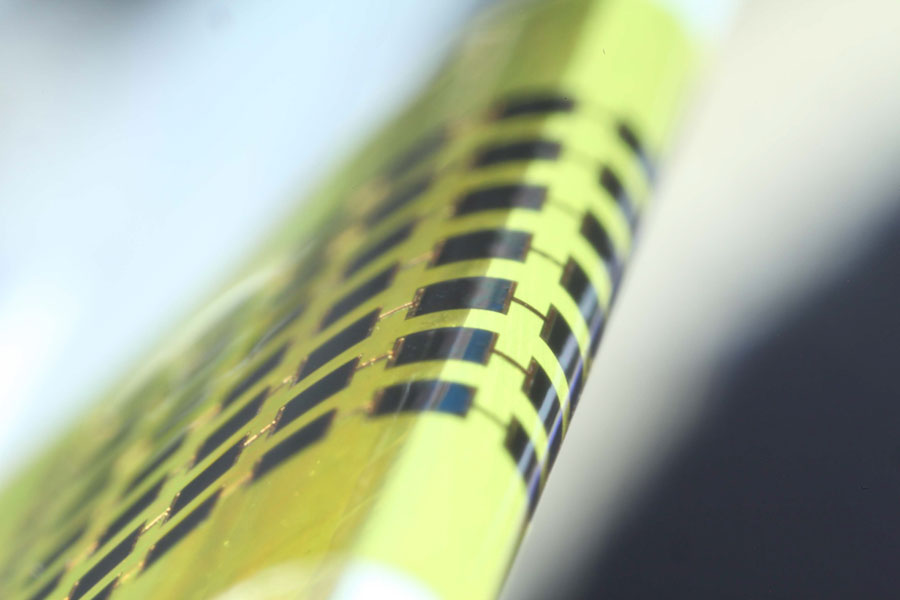 The team also performed numerical analysis of the cells, finding that they experience one-fourth the amount of strain of similar cells that are 3.5 micrometers thick.

“The thinner cells are less fragile under bending, but perform similarly or even slightly better,” Lee said.

A few other groups have reported solar cells with thicknesses of around 1 micrometer, but have produced the cells in different ways, for example by removing the whole substract by etching.

By transfer printing instead of etching, the new method developed by Lee and his colleagues may be used to make very flexible photovoltaics with a smaller amount of materials.

The thin cells can be integrated onto glasses frames or fabric and might power the next wave of wearable electronics, Lee said.