WASHINGTON, D.C., May 31, 2016 — When the script of Lawrence of Arabia called for wrecking a train, director David Lean found it easiest to go ahead and wreck a train, orchestrating and filming it with expert precision. Similarly, while it's possible to study explosives, sans explosives, new techniques involving high-speed, high-fidelity imaging with optical filtering and signal processing techniques have recently made setting off explosives and capturing the data in real-time a reasonable alternative to developing a new simulation.

The advances in image capturing allow the researchers to lower costs for obtaining information about explosive behavior by capturing multiple variables — pressure, temperature and chemical species maps — for each shot, rather than a single point measurement. This allows them to run one explosion, rather than several.

The researchers’ method of information gathering involves pyrometry, a technique for estimating temperature of incandescent bodies based upon their spectra of emitted thermal radiation. Their setup, which is specific to the type of explosive being investigated, employs a two-color imaging pyrometer, which consists of two monochrome cameras filtered at 700 nanometers and 900 nanometers, and a full-color single pyrometer that achieves wavelength resolution with a Bayer-type mask covering the sensor chip. For each of their rigs, described in full in the paper, the framing speeds are 20,000-40,000 frames per second, at a resolution of approximately 400 x 500 pixels with an exposure per frame of one to tens of microseconds. 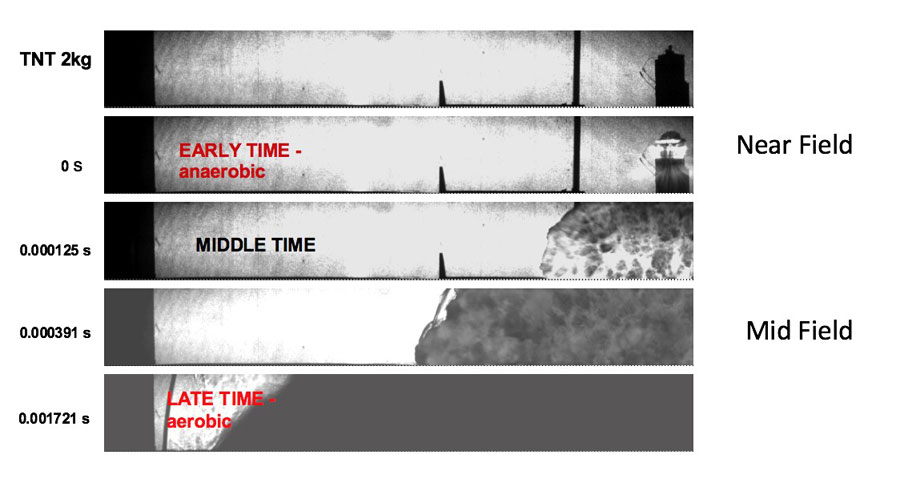 The pyrometers are also able to capture the air shock structure of the detonation event, allowing for simultaneous measurement of temperature and pressure. Information regarding the chemical species is similarly captured via measuring the emission spectrum of each targeted molecule. Their setup allows them to obtain a spatial resolution for a one-kilogram explosive charge down to the one-millimeter scale.

However, these mapping techniques result in wider error bars than those of ‘legacy’ point measurement techniques — an issue McNesby and his colleagues hope to improve on. Future work for the researchers will also include installing a full upgrade of their imaging rig, which will result in a tenfold increase in speed at full resolution.