Now, new work from a team at Lamont-Doherty Earth Observatory at Columbia University in Palisades, New York, gives insights into what is happening inside ice. The team has developed an apparatus to meet the growing need for measuring ice as it changes in response to external forces, a process ice scientists call “deformational behaviors.’’ These forces occur on Earth in glacial ice as it flows due to gravity, and in space as icy satellite bodies, such as the moons of Jupiter and Saturn, respond to tidal forces from their parent bodies. These planetary icy satellites greatly intrigue scientists with their potential to hold vast oceans under the ice, and possibly, to support life.

The Lamont-Doherty team’s report on their device — called a cryogenic deformation apparatus — appears in the current issue of the Review of Scientific Instruments, from AIP Publishing.

The paper addresses three basic processes. First, the frictional process of sliding: glaciers are rivers of ice that move (“slide”) ice from centers of accumulation to oceans, a process that affects climate and water levels. The second process is anelastic behavior of an icy body, which is its ability to turn periodic mechanical energy (from tides, for instance) into heat. The third process, tidal dissipation, has recently become a focus in planetary science as a potential heat source sufficient enough to create and maintain subsurface global oceans and viscous processes affecting ice flow in which disturbances within the crystal lattice allow ice to flow like honey (over long enough time periods).

The apparatus is an adaptation of the classical biaxial friction apparatus used to study fault mechanics and earthquake generation in rocks. Another refinement of the new apparatus is its temperature control capability. It allows scientists to measure a variety of ice behaviors at conditions that are applicable to both terrestrial glaciers and icy moon surfaces. In nature, glacier temperatures are between 0 and -20 degrees Celsius (-4 degrees Fahrenheit). Ice shells of icy satellites can have warm interiors — approximately 0 degrees C — but surface temperatures as low as -200 degrees C (-330 F), like on Saturn’s moon Enceladus, though the team’s apparatus does not reach that extremely low temperature.

Temperature versatility is important because increasing evidence documents dynamic and often unpredicted behavior of ice that could affect environmental conditions — as with glaciers on earth, for example — and explain the evolution of satellites’ bodies in space, as with Jupiter’s moon Europa and Saturn’s Enceladus.

“Our design allows for both glaciological and planetary applications over a range of deformational behaviors including friction, anelastic and viscous [properties]. That range of adaptability we hope will lead to new insights about ice deformation, in particular by combining analysis of different responses and seeing how they compete at different timescales,” said Christine McCarthy, the study's lead author.

In particular, the team hopes to extend their study of ice-on-rock friction to include more realistic interfaces, including till and, ultimately, pressurized melt water. 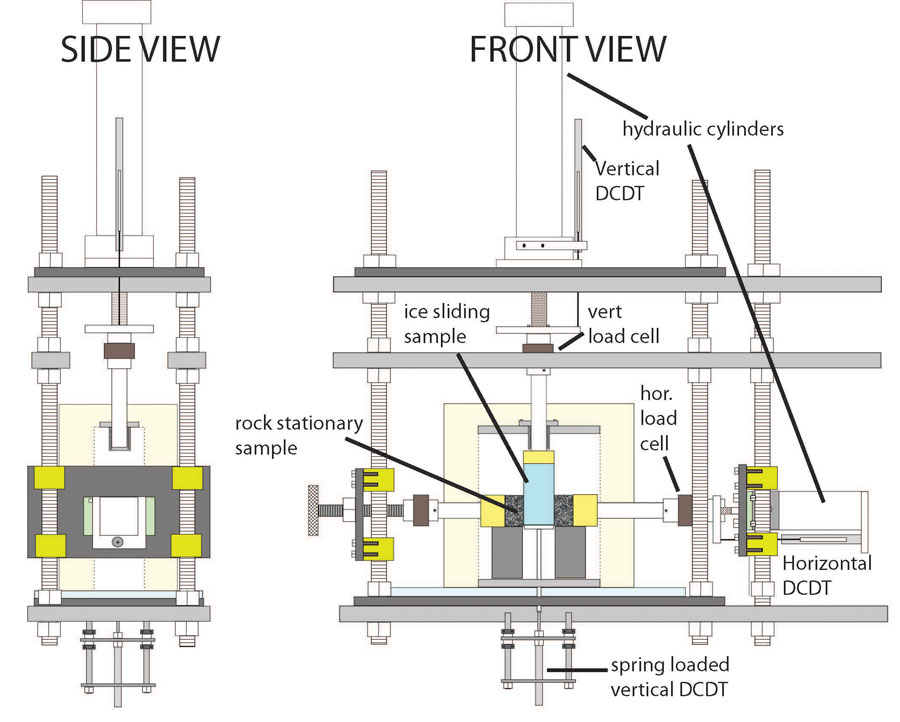 For their next step, the team intends to continue testing ice friction at terrestrial glacier temperatures, in particular exploring how tides affect sliding rates and stability.

For the next iteration of experiments they will dive into much deeper, colder temperatures, approximately -90 degrees C (-130 degrees F), and look at ice with small amounts of ammonia or sulfuric acid, which are second phases suggested for Enceladus and Europa, respectively.

“We’d like to see if frictional heating on faults of icy moons can explain the geysers of liquid water observed on their surfaces,” McCarthy said.

An apparatus to measure frictional, anelastic, and viscous behavior in ice at temperate and planetary conditions