WASHINGTON, D.C., September 13, 2016 — Materials with large dielectric constants — aka “high-K materials” — have recently garnered attention for their potential use within future generations of reduced-dimension semiconductor devices.

Barium strontium titanate, one such material, possesses an inherently large dielectric constant that can be altered significantly by an applied electrical field — by as much as a factor of 10. While this property has been known to exist for more than half a century and many researchers have attempted to exploit it, the technology has been limited by the low quality of the material. By semiconductor industry standards, the material is considered to be defective. 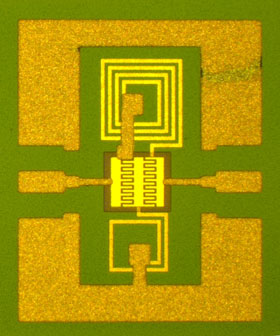 As the group reports this week in Applied Physics Letters, from AIP Publishing, by using extremely high-quality epitaxial materials they were able to greatly reduce the dielectric loss in ferroelectric tunable radio-frequency (RF) capacitors. Advances at the fundamental level, such as this one, open the door to future RF materials and devices that can be electrically reconfigured or “tuned” to adapt to changing environments.

The catch is that the deposition of complex oxides, such as barium strontium titanate, is problematic because of the high temperatures and oxygen-rich environment involved.

“Our work was made possible by recent advances in a hybrid form of MBE at UCSB that uses metal organic precursors,” explained Susanne Stemmer, a professor at the Materials Research Laboratory at UCSB.

The material’s large dielectric constants “present fabrication challenges because the inherently high capacitance density of the films requires smaller electrode dimensions and finer lithography than many typical integrated capacitor structures,” said Robert York, a professor in the Electrical & Computer Engineering department at UCSB. “Low-loss reactive devices also pose significant measurement challenges at microwave frequencies. The close collaboration of materials scientists and electrical engineers, and years of experience in device processing, was integral to the success of our work.”

Significantly, the team’s work clarifies that early work within the field that reported disappointing performances of BST-based devices was limited primarily by deposition and processing methods — not by intrinsic limitations of the underlying material itself.

“Our work also demonstrates that with suitable modifications, MBE systems — a proven technology for large-scale manufacturing of compound semiconductor materials — can be used to deposit a wide variety of high-quality materials,” Stemmer noted.

Another key discovery for the team was “exposing the susceptibility of the material to contamination by other organic materials commonly used in photolithography processes, which required some changes in the fabrication process that, in retrospect, may have factored into the low quality factors reported in the past,” York pointed out.

“For example, tunable capacitors using barium strontium titanate can be used to create tunable antennas for cellular communications, which allows a small antenna to be tuned over a wide frequency range or enables a phone to adapt to different surroundings for improved efficiency and battery life,” York said.

“In fact, some barium strontium titanate devices are already used for commercial RF electronics and the infrastructure for deposition and fabrication already exists within most semiconductor foundries, so the timeline for exploiting this advance could be relatively short compared to the typical timeline for a materials advance,” York added.

While numerous research avenues exist for further exploring the materials involved, and improving the processing and device design, one immediate next step for the team is to “demonstrate high-performance integrated circuits with films deposited directly on metal electrodes,” Stemmer said. “Integration with other commercially viable substrate materials is also of interest.”