Researchers determine the molecular structure of alpha-pinene, a compound produced by pine trees that's important for air quality and climate. 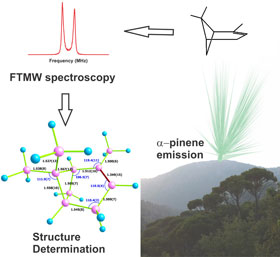 WASHINGTON, D.C., December 7, 2017 — The fresh, unmistakable scent of a pine forest comes from a medley of chemicals produced by its trees. Researchers have now, for the first time, accurately determined the chemical structure of one of these compounds in its gas phase, a molecule called alpha-pinene, which is also produced by tropical forests. The new analysis can help scientists better detect and understand how alpha-pinene — and potentially other similar molecules — react with other gases in the atmosphere, a process which produces pollutants and particles called aerosols that affect health and climate.

“What you smell in the forest are biogenic volatile organic molecules emitted into the atmosphere,” said Thérèse Huet, a physicist at University of Lille in France. She and her colleagues describe their analysis this week in The Journal of Chemical Physics, from AIP Publishing. Determining the structure of these molecules, she said, “is paving the way for future spectroscopic detection and atmospheric chemistry modeling.”

Among biogenic volatile organic molecules is a class of compounds called monoterpenes, which react with ozone, hydroxyl radicals, nitrogen oxides, and other gases in the atmosphere. These reactions create pollutants and aerosols, which, for example, can seed the condensation of more clouds and help cool the climate. The main monoterpene is alpha-pinene, of which forests release about 50 trillion grams each year into the atmosphere’s lowest layer, the troposphere.

Because alpha-pinene exists in the gas phase only at low concentrations, requiring highly sensitive experimental techniques, no one had previously identified its gas-phase structure. “Up to now, structure determination of complex molecules such as monoterpenes was only possible in the condensed phase,” Huet said.

The researchers identified quantum parameters called rotational constants that best describe the data with no structural assumptions. They repeated this analysis for all naturally occurring isotopic versions of alpha-pinene, in which carbon-13 isotopes replace different carbon-12 isotopes in the molecule. This set of rotational constants describes the complete structure of alpha-pinene gas.

Their technique, Huet said, can also be used for other monoterpenes. Now that the researchers have the structure of alpha-pinene, they are better able to model the first steps of nature’s aerosol formation in the atmosphere.