WASHINGTON, D.C., November 8, 2016 — As Francis Crick, one of Britain’s great scientists, once said: “If you want to understand function, study structure.” Within the realm of chemical physics, a clear example of this is the two forms of carbon — diamond and graphite. While they differ only in the atomic arrangement of atoms of a single element, their properties are quite different.

Differences between the properties of seemingly similar elements of a “family” can be intriguing. Carbon, silicon, germanium, tin and lead are all part of a family that share the same structure of their outermost electrons, yet range from acting as insulators (carbon) to semiconductors (silicon and germanium) to metals (tin and lead).

Is it possible to understand these and other trends within element families? In an article this week in The Journal of Chemical Physics, from AIP Publishing, a group of researchers from Peter Grünberg Institute (PGI) in Germany, and Tampere University of Technology and Aalto University in Finland, describe their work probing the relationship between the structure (arrangement of atoms) and function (physical properties) of a liquid metal form of the element bismuth.

“There are relatively few — less than 100 — stable elements, which means that their trends are often easier to discern than for those of alloys and compounds of several elements,” said Robert O. Jones, a scientist at PGI.

The group’s present work was motivated largely by the availability of high-quality experimental data — inelastic x-ray scattering (IXS) and neutron diffraction — and the opportunity to compare it with results for other liquids of the Group 15 nitrogen family (phosphorus, arsenic, antimony and bismuth). Phosphorus seems to have two liquid phases, and the amorphous form of antimony obtained by cooling the liquid crystallizes spontaneously and explosively. 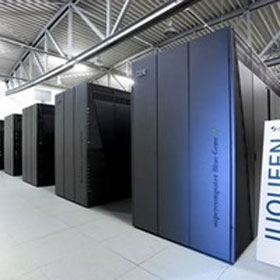 Their structural studies use extensive numerical simulations run on one of the world’s most powerful supercomputers, JUQUEEN, in Jülich, Germany.

“We’re studying the motion of more than 500 atoms at specified temperatures to determine the forces on each atom and the total energy using density functional calculations,” Jones explained. “This scheme, for which Walter Kohn was awarded the 1998 Nobel Prize in chemistry, doesn’t involve adjustable parameters and has given valuable predictions in many contexts.” While density functional theory is in principle exact, it is necessary to utilize an approximate functional.

The positions and velocities of each atom, for example, are “stored at each step of a ‘molecular dynamics’ simulation, and we use this information to determine quantities that can be compared with experiment,” he continued. “It’s important to note that some quantities that are given directly by the simulation, such as the positions of the atoms, can only be inferred indirectly from the experiment, so that the two aspects are truly complementary.”

One of their most surprising and pleasing results was “the excellent agreement with recent IXS results,” Jones said. “One of the experimentalists involved noted that the agreement of our results with the IXS ‘is really quite beautiful,’ so that even small differences could provide additional information. In our experience, it’s unusual to find such detailed agreement.”

In terms of applications, the group’s work “provides further confirmation that simulations and experiments complement each other and that the level of agreement can be remarkably good — even for ‘real’ materials,” Jones pointed out. “However, it also shows that extensive, expensive, and time-consuming simulations are essential if detailed agreement is to be achieved.”

Jones and his colleagues have extended their approach to even longer simulations in liquid antimony at eight different temperatures, with the goal of understanding the “explosive” nature of crystallization in amorphous antimony (Sb).

“We’ve also run simulations of the crystallization of amorphous phase change materials over the timescale — up to 8 nanoseconds — that is physically relevant for DWD-RW and other optical storage materials,” he added, emphasizing that these types of simulations on computers today typically require many months. “They show, however, just how valuable they can be, and the prospects with coming generations of computers — with even better optimized algorithms — are very bright.”

The prospects of applications within other areas of materials science are extremely good, but the group is now turning its attention to memory materials of a different type — for which the formation and disappearance of a conducting bridge (a metallic filament) in a solid electrolyte between two electrodes could be the basis of future storage materials.

“Details of the mechanism of bridge formation are the subject of speculation, and we hope to provide insight into what really happens,” Jones said.

Collective excitations and viscosity in in liquid Bi