A group of researchers in Germany and Canada are paving the way for mass-producing printable electronics by demonstrating a fully inkjet-printable flexible resistive memory.

WASHINGTON, D.C., April 4, 2017 – Memory devices — as a subset of electronic functions that includes logic, sensors and displays — have undergone an exponential increase in integration and performance known as Moore’s Law. In parallel, our daily lives increasingly involve an assortment of relatively low-performance electronic functions implemented in computer chips on credit cards, in-home appliances, and even smart tags on consumer products.

While memory devices are becoming progressively more flexible, their ease of fabrication and integration in low performance applications have been generally been treated as being of secondary importance. But now, thanks to the work of a group of researchers at Munich University of Applied Sciences in Germany and INRS-EMT in Canada, this is about to change. 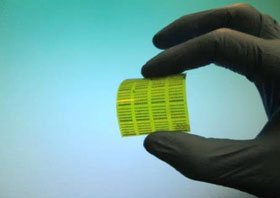 Additive manufacturing, perhaps best known because of 3-D printing, allows for a streamlined process flow — eliminating complex lithography and material removal steps at the detriment of feature size, which is in many cases not critical for memory devices in less computationally demanding uses.

Inkjet printing is a common office technology that competes with laser printing. It offers the added benefit of a straightforward transfer from inkjet to roll-to-roll printing. In an article appearing this week in Applied Physics Letters, from AIP Publishing, the group presents a proof of concept, using resistive memory (ReRAM) that now paves the way for mass-producing printable electronics.

The basic principle behind the group’s ReRAM is simple. “In any kind of memory, the basic memory unit must be switchable between two states that represent one bit, or ‘0’ or ‘1.’ For ReRAM devices, these two states are defined by the resistance of the memory cell,” explained Bernhard Huber, a doctoral student at INRS-EMT and working in the Laboratory for Microsystems Technology at Munich University of Applied Sciences.

For the conductive-bridge random access memory (CB-RAM) used by the group, “0” is “a high-resistance state represented by the high resistance of an insulating spin-on glass, which separates a conducting polymer electrode from a silver electrode,” he continued. “The ‘1’ is a low-resistance state, which is given by a metallic filament that grows into the spin-on glass and provides a reversible short-circuit between the two electrodes.”

Rather than printing colors, “we use functional inks to deposit a capacitor structure — conductor-insulator-conductor — with materials that have already been deployed in cleanroom processes,” Huber said. “This process is identical to that of an office inkjet printer, with an additional option of fine-tuning the droplet size and heating the target material.”

The concept of CB-RAM is already well established and the group’s leaders — Andreas Ruediger of INRS-EMT in Canada and Christina Schindler of Munich University of Applied Sciences — have previously worked on more conventional CB-RAM cells.

What’s the significance of the group’s work?

“We not only demonstrated that a complete additive (printing) process was possible but also that the performance parameters are comparable to cleanroom-fabricated devices,” Schindler said. “The biggest technological appeal is the mechanical flexibility of our memory tiles, and the fact that all materials required for processing are commercially available.”

“From our proof of concept, we’re paving a road toward optimization,” Schindler said. “Our biggest surprise was how little device performance depends on the fabrication process.”

This enables extremely low-cost flexible electronics through printing processes. “Print-on-demand electronics are another large field of possible applications,” Ruediger said. “At present, the main source of versatile electronics is field-programmable gate arrays that provide a reconfigurable circuitry that can be adopted for different purposes with predefined limitations.”

“Just imagine supermarkets printing their own smart tags or public transport providers customizing multifunctional tickets on demand. ‘Wearables’ that explicitly require flexible electronics may also benefit,” Schindler said. The costs for such a printer, after optimization of the process steps, could drop to within the range of current inkjet printers.