WASHINGTON, D.C. Sept. 20, 2013 — Memory based on electrically-induced “resistive switching” effects have generated a great deal of interest among engineers searching for faster and smaller devices because resistive switching would allow for a higher memory density.

Researchers have tested a number of oxide materials for their promise in resistive switching memories, and now a team of researchers in Singapore have demonstrated how conductive nano-filaments in amorphous titanium dioxide (TiO2) thin films could be utilized for resistive switching device applications.

Yuanmin Du, Andrew Thye Shen Wee and researchers from the National University of Singapore and the Agency for Science, Technology and Research (A*STAR) of Singapore, describe their results in the journal AIP Advances, which is produced by AIP Publishing. 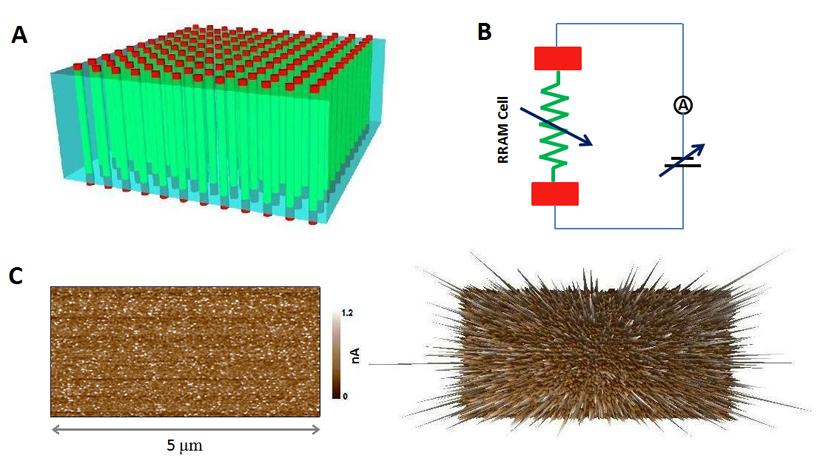 The basic idea of a resistive switching device is that an oxide, which normally acts as an insulator, can be transformed into a conductor, creating a nanoscale filament by using a sufficiently high voltage. With a RRAM (Resistive Random-Access Memory) device comprising of a single filament, two distinct resistance states (“1” and “0”) can be obtained through a simple process of filament rupture and re-formation.

This research team applied both CAFM and KPFM (Kelvin Probe Force Microscopy), a unique approach that allowed the explanation of the observed resistive switching phenomena. Instead of treating filamentary and interfacial effects separately as done previously, both effects were integrated into one filament-interface model, which could help guide the design of RRAM based devices.

The evidence of high density and uniformly distributed nano-filaments implies that high-density memory cells could be made using such oxide thin films. Such materials are promising for future applications. The small dimension of the formed filament provides great advantages over current technology, as Du explains. “In addition to TiO2, we believe that many other oxides could also have the similar properties.”

National University of Singapore and Agency for Science, Technology and Research (A*STAR) of Singapore