WASHINGTON D.C. Sept. 27, 2013 — As a modern culture, we crave artificial white lights — the brighter the better, and ideally using less energy than ever before. To meet the ever-escalating demand for more lighting in more places and to improve the bulbs used in sports stadiums, car headlights and street lamps, scientists are scrambling to create better light-emitting diodes (LEDs) — solid state lighting devices that are more energy efficient than conventional incandescent or fluorescent light sources.

Just one thing stands in the way: “droop,” the term for a scientific problem related to LEDs currently in use. Droop refers to the fact that LED efficiency falls as operating currents rise, making the lights too hot to power in large-scale applications. Many scientists are working on new methods for modifying LEDs and making progress toward cooler, bigger and brighter bulbs. 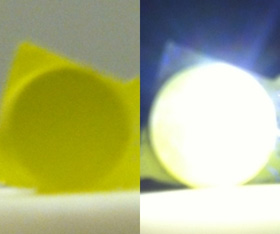 Now investigators at University of California, Santa Barbara, led by material scientists Kristin A. Denault and Michael Cantore, have devised an alternative means of creating high-power white light by using a different excitation source — a laser diode in combination with inorganic phosphors, instead of the traditional LEDs.

Their laser-based lighting options are high in efficiency and high in performance metrics, according to their study, which is described in the journal AIP Advances, which is produced by AIP Publishing.

“We found two ways to create high-intensity ‘cool’ white light, explained Denault. “In one we used a blue laser diode and yellow-emitting phosphor powder with a luminous flux of 252 lumens, which is comparable to current high-brightness white LEDs. For our second method, we used a near-ultra-violet laser diode and a combination of red-, green-, and blue-emitting phosphors.”

They also achieved a variety of other color temperatures with high color rendition, broadening the range of applications for these new lights, she said.