WASHINGTON D.C. May 6, 2014 — A team of U.K. researchers has developed a way to dramatically reduce the complexity of modeling “bistable” systems which involve the interaction of two evolving species where one changes faster than the other (“slow-fast systems”). Described in The Journal of Chemical Physics, the work paves the way for easier computational simulations and predictions involving such systems, which are found in fields as diverse as chemistry, biology and ecology. 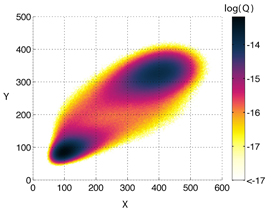 Imagine, for instance, trying to predict how a population of whales would fare based on the impact of fluctuating ocean levels of plankton, if that was their primary food source. It might seem easy enough to estimate how many happy whales you will have given a relatively constant supply of plankton, but it’s much harder to reckon what will happen to the population when their food source fluctuates dramatically.

That’s much closer to reality: over their lifetimes, your average whale could endure multiple feasts and famines according to plankton’s fickle blooms, and accurately predicting the impacts these will have on the whale population are made possible only by accounting for both the slow whale population dynamics and the much faster and widely fluctuating plankton population dynamics. This situation can be represented as a classic “bistable” problem: conceptually challenging, mathematically complicated, computationally intensive and, until now, nearly impossible to solve.

But hitting upon a solution that was in itself somewhat bistable, Maria Bruna and colleagues at the University of Oxford’s Mathematical Institute and at Microsoft Research’s Computational Science Laboratory in Cambridge, England developed a new method for deriving simpler models of bistable systems.

Their solution involved combining two existing mathematical techniques called “slow manifold theory,” which is applied to slow-fast systems; and “perturbation theory,” which is used for the study of metastable transitions. They tested this approach against the more standard, computationally expensive model that exhaustively treated the fast processes to predict the slow. What their results showed was that their simpler method worked just as well at predicting the slow process. Then they applied this to a predator-prey model and showed that it could accurately calculate the time to extinction of the predator (the slow species, like the whale) when the abundance of its prey (the fast species, like the plankton) fluctuates around two alternative states.

A key advantage of the new approach is that it allowed the researchers to obtain the accurate time-dependent behavior of the slow variable, in contrast to earlier methods that are only useful to compute equilibrium quantities.

“Using this method one can obtain accurate simulations of the process of interest that take into account the effect of the fast bistable processes, but much more cheaply,” Bruna said.

“Since the reduction method is systematic, it can be easily applied to other systems and extended to higher dimensions,” she added. For instance, the method could be extended to help understand why some ecosystems, consisting of multiple fast-slow interaction processes, fail to return to their original state after being perturbed by harvesting.