WASHINGTON, D.C., August 7, 2018 — Metastasis, or the formation of secondary tumors, is a leading contributor to the vast majority of deaths related to cancer. The exact mechanisms for how broken cellular function appears in cells far removed from a cancer’s primary tumor remain an area of ongoing research. New work looks to explain a century-old hypothesis for how cancer forms hybrids within the body, leading to metastasis.

Researchers from the University of Minnesota Twin Cities confirmed a link between healthy-tumor hybrid cells and metastatic tumors for the first time in live animals. In APL Bioengineering, from AIP Publishing, tthe team discusses how they studied the distinct, heterogenous gene expression profiles found in human hybrid cells and how hybrid cells spontaneously occur in mouse models.

“The research community is recognizing that heterogeneity can make tumors very hard to treat,” said Brenda Ogle, one of the authors on the paper. “Instead of creating many different therapies to target different tumor cell types, it might be possible to quell heterogeneity at the source by limiting hybrid formation in the tumor.”

Nearly 100 years ago, one theory suggested that some metastatic cells spontaneously caused secondary tumors by fusing their cellular material with regular cells and re-establishing their errant gene expression. It was only in recent years that sequencing technology and reporter molecules were advanced enough to tackle the topic.

To address these questions, Ogle and her colleagues first cultured healthy cells and tumor cells that spontaneously fused to form hybrids. Using a technique called RNA-seq, the group took a molecular snapshot of the gene expression of each fused hybrid cell.

The resulting hybrids were found to express the genes of both the healthy cell and the tumor cell. This factor aids metastatic cells in surviving the primary tumor and potentially helping lay the groundwork for other tumor cells.

The group then engineered mice that produced an inducible reporter enzyme called luciferase when hybrids were present. This allowed the team to track hybrid formation in living animals for the first time. Rather than using bioluminescent macroscopic imaging, which lacks the sensitivity to detect cells scattered across a specimen, they developed a technique that stitched together hundreds of microscopic images to detect luciferase.

Sites where the mice expressed luciferase lit up, indicating that hybrid cells were forming spontaneously in vivo. The metastases showed a significantly higher proportion of hybrid cells than the primary tumor.

“When hybrids form, cytoplasmic and nuclear material of two cells are forced to reorganize into one cell,” Ogle said. “Some of those cells can suddenly go gangbusters and start proliferating and moving more actively than their parent cells.”

Ogle said the group hopes their findings will lead to further research on how hybrids form, since the development of drugs to inhibit hybrid formation might prevent metastatic spread. 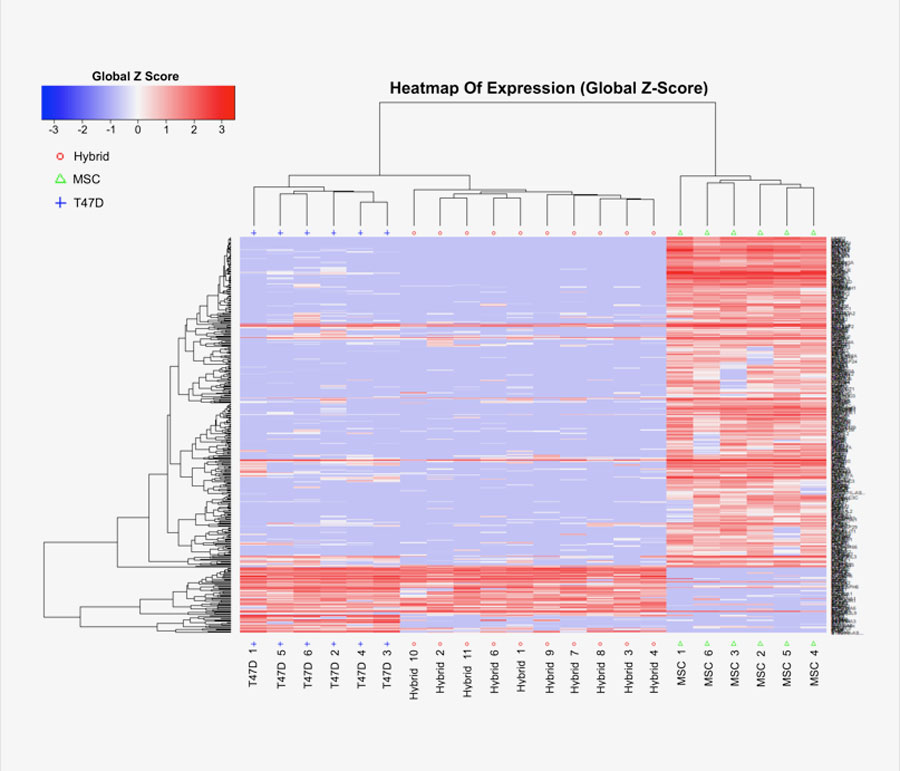