Researchers developed a diamond-based detector that can control the dose of radiation given to live cells down to a single particle.

WASHINGTON, D.C., December 13, 2017 — Depending on the dose and the target, radiation can cause incredible damage to healthy cells or it can be used to treat cancer and other diseases. To understand how cells respond to different doses of radiation, scientists need to direct precise amounts of energy to specific areas of the cell. Measuring dosage can be challenging, however, especially when working with low-energy protons.

A collaboration of researchers from the Université de Bordeaux, Centre National de la Recherche Scientifique and CEA‐LIST has developed an ultra-thin diamond membrane that can measure the number of protons in a dose of radiation with almost perfect accuracy. The detector attaches to a charged-particle microbeam and enables the delivery of radiation to an area less than 2 micrometers wide. The study, published this week in Applied Physics Letters, from AIP Publishing, represents a valuable technological advance for radiation biology.

Previous experiments had already established that diamond membranes can detect and quantify protons, but until the current study, no one had developed the technology for biological investigations.

“The device is completely compatible with living cells in their liquid environment,” said Philippe Barberet, a biophysicist at the Université de Bordeaux. “It will allow us to irradiate different kinds of cells and organisms using single protons, which is not so easy to do using low-energy accelerators.”

Barberet worked with Michal Pomorski at CEA-LIST, who created the ultra-thin diamond sensor by slicing down and then plasma etching a commercially available, single-crystal diamond to about 1 micrometer thick. They coated both sides of the detector with transparent and electrically conductive electrodes to collect the electrical signal from the proton beam as it passes through diamond membrane. This design is compatible with microscopy, ensures good contact between the detector and the biological sample, and counts protons with better than 98 percent accuracy. 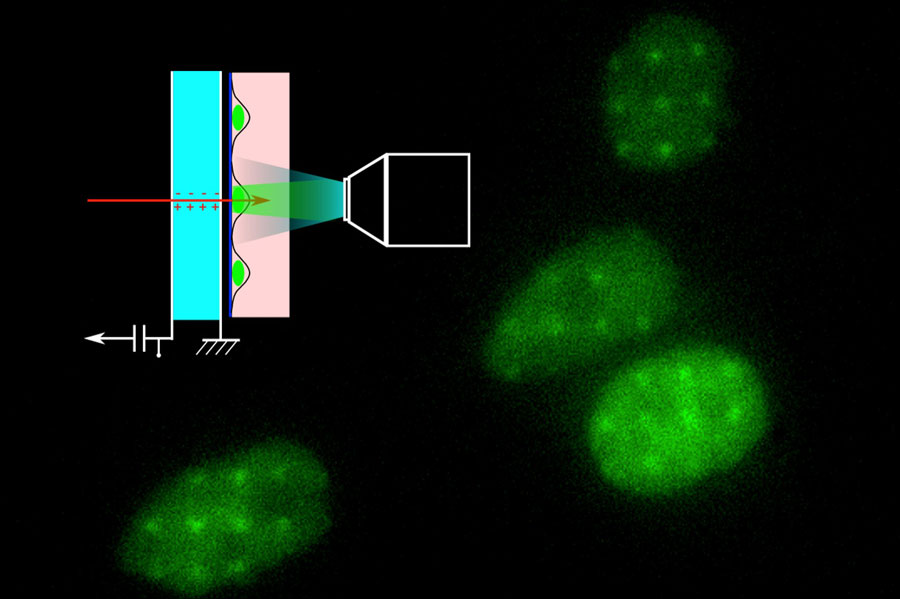 To test the effectiveness of the diamond membranes when irradiating live cells, the group used a cell line engineered to express a DNA repair protein called XRCC1, tagged with green fluorescent protein (GFP). When DNA damage occurs in these cells, the GFP lights up at the site of the repairs.

“XRCC1 is involved in DNA repair pathways and it’s one of the first proteins recruited,” said Barberet. “You irradiate and you immediately see an effect.” They delivered 100 protons spaced 5 micrometers apart to the cells. The resulting pattern of green irradiation spots confirmed that the beam inflicted damage in circles measuring less than 2 microns across.

The diamond membranes could become a valuable tool for increasing precision in radiation biology research. The researchers note, however, that their utility is limited to groups who have access to proton beams from particle accelerators.