WASHINGTON, D.C., April 24, 2017 — Researchers in South Korea have quantitatively deconstructed what they describe as the “ingenious mobility strategies” of seeds that self-burrow rotationally into soil. This is an example of the many ways nature uses biological geometry to provide plants with muscle-like capabilities.

Professor Ho-Young Kim, from Seoul National University in Korea, brought together his colleagues to start a research project based on inspiration he took from watching a plant documentary. Seeds maneuvered to dig into soil using a coiled appendage, known as an awn, that responds to humidity. The team investigated this awn’s burrowing and discovered how the nubile sprouts seem to mimic a drill to bury themselves. Their findings, published last week in the journal Physics of Fluids, by AIP publishing, could have dramatic implications for improving agricultural robotics.

“It was a surprise to us that the plant can produce effective motions without muscles. We immediately investigated plant species with self-burrowing seeds and identified plant species using similar digging strategies,” said Wonjong Jung, a former student of Kim and now senior researcher at Samsung Advanced Institute of Technology in Korea. “Although the seeds of some plants such as wild wheat have simple curved awns that exhibit only bending motions, the seeds of other plants with helical awns can generate rotary motions for digging. We thought that it was highly probable that the seeds spin themselves to facilitate digging.”

The research team studied seeds from the flowering species Pelargonium, whose helically coiled awn responds to humidity, demonstrating hygroscopic expansion. In humid environments, the awn deforms to straighten out. If the seed is anchored, this reaction can create thrust against the soil as the unwinding coil rotationally digs and buries the seed.

“Our work illuminates the surprising functionality and beauty of natural design,” Wonjung Kim, a professor at Sogang University in Korea said. “Although plants cannot generally produce active motions due to their lack of muscle, some seeds have evolved to create burrowing toward a better germination environment. More surprisingly, when a helical shape awn is exploited, the burial strategy is remarkably good for drag reduction.” 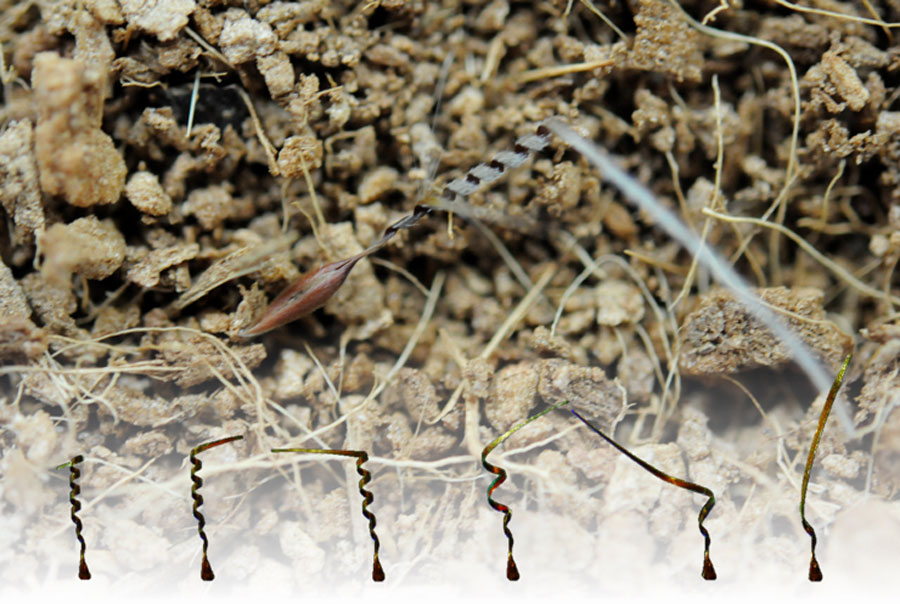 Beyond highlighting another of evolution’s wondrous mechanical developments, the mathematical models resulting from this work have direct applications to current and next-generation robotics. Understanding the mechanics of these seeds and how their motion reduces the drag force of the soil’s granular environment deepens our insight into soil-digging machine design.

“To obtain environmental information such as soil pollution in inaccessible areas such as space planets, battlefields, or disaster areas, small robots are needed,” Kim said.  “Our research has demonstrated a reduction in particle drag by rotation, which informs an efficient intruder design method for digging robots. Furthermore, self-burrowing awns provide inspiration for designing non-motorized robots that respond to various stimuli such as heat, light, and humidity.”