WASHINGTON, D.C., June 13, 2017 — In many ways, magnets are still mysterious. They get their (often powerful) effects from the microscopic interactions of individual electrons, and from the interplay between their collective behavior at different scales. But if you can’t move these electrons around to study how factors like symmetry impact the larger-scale magnetic effects, what can you do instead?

It turns out that assemblies of metallic nanoparticles, which can be carefully arranged at multiple length scales, behave like bulk magnets and display intriguing, shape-dependent behavior. The effects, reported this week in the Journal of Applied Physics, from AIP Publishing, could help improve high-density information storage and spintronics technologies.

“The work was inspired by the question [of] how the magnetic interaction between nanoparticles influences the magnetic behavior of the system as a whole, since such array structures are used, for example, in high density storage media,” said Alexander Fabian, lead author of the study from Justus-Liebig University Giessen in Germany. “To study the influence of [the] shape of the nanoparticle assemblies, as well as the distance between them, we came up with the idea of a hierarchical design of the samples where the corresponding parameters can be varied systematically.”

The round, metallic Fe304 nanocomponents Fabian and his colleagues used in their study were arranged to form differing shapes at three different length scales. Using electron beam lithography, a modernized lithography method that uses electrons to write the desired structure, they configured the nanoparticles into closely-packed shapes, such as triangles, with one side measuring about 10 particles in length. A shaped grid of the smaller-scale configurations, spaced approximately one micron apart, comprised the third hierarchy of the length scales. 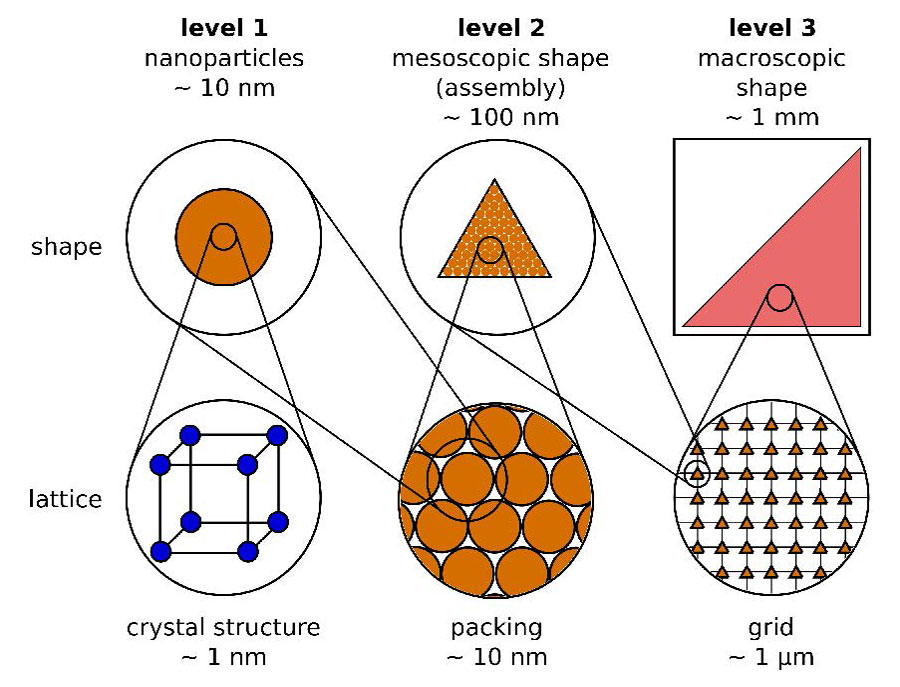 “For the preparation of the samples we used lithographic methods, which allow the precise control of the distance and the shape of the nanoparticle assemblies,” Fabian said. “For each of the three hierarchical levels, there are two contributions, namely the lattice-like part and the shape-like part. The high number of possibilities in sample design makes this a challenging aspect to find systems with the most promising physical properties.”

The shapes configured at each (sub-)scale were chosen based on their relative symmetries, so as to isolate the effects measured to their causal dimensional scale.

“The symmetries of the lattice and the shapes were here chosen to not interfere with each other. For example, the circular shaped assemblies were combined with different types of lattices,” Fabian said. “Assemblies of different shapes, such as triangles, squares or circles, exhibit an angle-dependence of the magnetic anisotropy (direction dependence) corresponding to the shape of the assembly.”

With these clever designs, the group was able to demonstrate a large-scale magnet, built from the nanoparticle up. Although their structures acted like bulk ferromagnets, the precise measurements surprised them.

“Our results show that on the chosen length scales, only the shape of the assemblies influences the magnetic behavior, revealing that the assemblies of nanoparticles behave like a single bulk ferromagnet.” Fabian said. “Most surprisingly was that the particles seem to behave like a bulk ferromagnet, but with a different magnetization value than that for bulk material, which is an interesting point for future investigations.”

Experiments like these can offer valuable, fundamental insight to the latest magnetics-dependent technologies, which make up much of the electronics market. But more fundamentally, these nanoscopically bottom-up approaches are demonstrating controllable means of probing the fundamental fibers comprising bulk and collective electromagnetic properties.