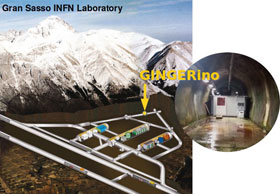 A group from the Italian National Institute for Nuclear Physics’ (INFN) Laboratori Nazionali del Gran Sasso (LNGS) are working with a research program aimed at measuring the gyroscopic precession Earth undergoes due to a relativistic effect called the Lense-Thirring effect. This program, called Gyroscopes in General Relativity (GINGER), would eventually use an array of such highly sensitive RLGS. For now, they have successfully demonstrated its prototype, GINGERino, and acquired a host of additional seismic measurements necessary in their efforts.

In this week’s journal Review of Scientific Instruments, from AIP Publishing, the group reports their successful installation of the single-axis GINGERino instrument inside the INFN’s subterranean laboratory LNGS, and its ability to detect local ground rotational motion.

Ultimately, GINGER aims to measure Earth’s rotation rate vector with a relative accuracy of better than one part per billion to see the miniscule Lense-Thirring effects.

“This effect is detectable as a small difference between the Earth’s rotation rate value measured by a ground based observatory, and the value measured in an inertial reference frame,” said Jacopo Belfi, lead author and a researcher working for the Pisa section of INFN. “This small difference is generated by the Earth’s mass and angular momentum and has been foreseen by Einstein’s general theory of relativity. From the experimental point of view, one needs to measure the Earth rotation rate vector with a relative accuracy better than one part per billion, corresponding to an absolute rotation rate resolution of 10-14 [radians per second].”

The underground placement of these systems is essential for getting far enough away from external disturbances from hydrology, temperature or barometric pressure changes to carry out these types of sensitive measurements. 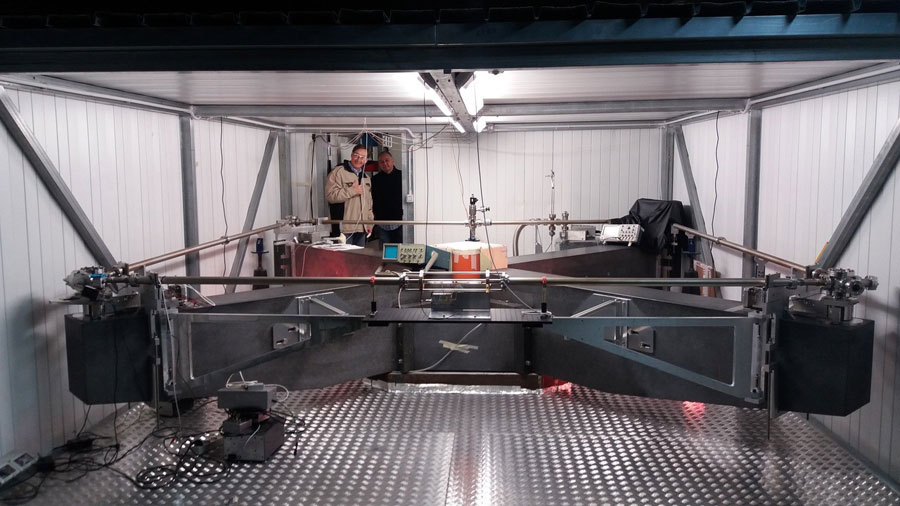 This pilot prototype is expected to reveal unique information about geophysics, but, according to Belfi, “underground installations of large RLGs, free of surface disturbances, may also provide useful information about geodesy, the branch of science dealing with the shape and area of Earth.”

The ultimate goal for GINGERino is to achieve a relative precision of at least one part per billion, within a few hours’ time, to integrate with the less precise information of Earth’s changing rotation provided by global positioning system data and the astronomically based measurements of the International Earth Rotation System.

“RLGs are essentially active optical interferometers in ring configuration,” Belfi said. “Our interferometers are typically made of three or four mirrors that form a closed loop for two optical beams counter propagating along the loop. Due to the Sagnac effect, a ring interferometer is an extremely accurate angular velocity detector. It’s essentially a gyroscope.”

The group’s approach enabled the first deep underground installation of an ultrasensitive large-frame RLG capable of measuring the Earth’s rotation rate with a maximum resolution of 30 picorads/second.

“One peculiarity of the GINGERino installation is that it’s intentionally located within a high seismicity area of central Italy,” Belfi said. “Unlike other large RLG installations, GINGERino can actually explore the seismic rotations induced by nearby earthquakes.”

One of the biggest challenges during GINGERino’s installation was controlling the natural relative humidity, which was above 90 percent.

“With this humidity level, long-term operation of GINGERino’s electronics wouldn’t be viable,” Belfi said. “So to maneuver around this problem, we enclosed the RLG inside an isolation chamber and increased the internal temperature of the chamber via a set of infrared lamps supplied with a constant voltage.”

By doing so, the group was able to drop the relative humidity down to 60 percent. “It didn’t significantly degrade the natural thermal stability of the underground location, which allows us to keep GINGERino’s cavity length stable to within one laser wavelength (633 nanometers) for several days,” he said.

GINGERino is now operating, along with seismic equipment provided by the Italian Institute of Geophysics and Volcanology, as a rotational seismic observatory.

“GINGERino and one co-located broadband seismometer make it possible to retrieve, via a single station, information about the seismic surface wave’s phase velocity that in standard seismology requires using large arrays of seismometers,” said Belfi.