WASHINGTON, D.C., July 12, 2017 — Charged surfaces submerged in an electrolyte solution can sometimes become oppositely charged. This nonintuitive phenomenon, known as charge inversion, happens when excess counter ions adsorb, or adhere, to the surface. It can occur in a number of chemical and biological settings. In certain situations, theory predicts that a highly charged surface not only changes sign, but can become more highly charged than the original surface. This is known as giant charge reversal, but remains controversial and has never been observed experimentally.

Results reported this week in The Journal of Chemical Physics, from AIP Publishing, confirm, for the first time, giant charge reversal for a surface in contact with a trivalent electrolyte solution. In contrast to previous observations, this did not require a highly charged surface.

The investigators, Zhi-Yong Wang of Chongqing University of Technology in China, and Jianzhong Wu of the University of California, Riverside, found that the dielectric response of the solvent enhances correlation of multivalent ions with oppositely charged surface groups. This facilitates formation of interfacial couplings of opposite charges called Bjerrum pairs, and leads to the observed giant charge reversal.

“Previous theoretical studies did not provide a reliable description of ion interfacial behavior in systems of this type,” Wang said. For example, there has been no consensus in the literature about what type of interaction dominates the excess adsorption of multivalent counterions at a charged interface.

The present study accounts for the combined effects of discrete surface charges, ion-excluded volume, surface corrugations and spatial variation of the dielectric response. The latter was allowed to vary since the permittivity and charge dynamics of water in nanopores, such as those in ion channels in cell membranes, can be dramatically different from that in bulk water.

For all these reasons, the researchers took a closer look at the dielectric response of confined electrolytes in a realistic model system. This led to their reported observations here. One reason that previous studies missed the observed giant charge reversal phenomenon, Wang said, is because the inherently heterogeneous, nonuniform nature of the surface charge was neglected. In the current study, they showed that surface charge heterogeneity and the dielectric response of the solvent are not two separate issues, but must be considered together. In particular, a clear understanding of the role played by image charges is essential to attain consistent interpretation of experimental findings. 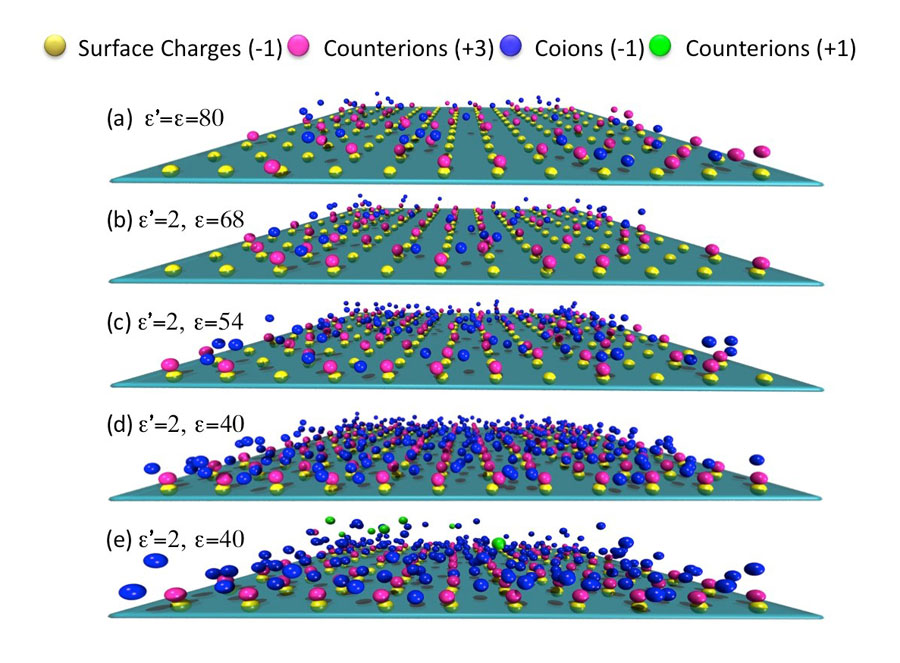 These observations indicate that the common assumption of a uniform surface charge density is questionable in the presence of multivalent ions. Such an assumption does not provide a faithful representation of interfacial structure and appears to miss important physics that occur in confined spaces, such as those common in biological systems.

The authors plan to extend their study to look into other mixed electrolyte solutions in contact with curved or irregular surfaces. In addition, more work is needed to account for local dielectric inhomogeneities near charged surfaces, which go beyond traditional models.