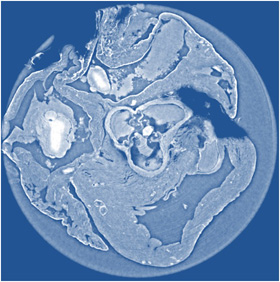 WASHINGTON, D.C., October 21, 2014 — X-ray phase tomography is an imaging technique that uses penetrating X-rays to create volumetric views through “slices” or sections of soft biological tissues, such as tumors, and it offers strongly enhanced contrast compared to conventional CT scans. Yet scientists still do not know which X-ray phase tomography methods are best suited to yield optimized results for a wide variety of conditions.

Led by Irene Zanette, a scientist affiliated with both ESRF and the Technische Universität München (TUM) in Germany, the researchers put these three techniques to the test by examining cancerous tissue from a mouse model and an entire rat’s heart, which they report this week in the Journal of Applied Physics, from AIP Publishing.

Along with colleagues Bert Müller, group leader of the Biomaterials Science Center in Switzerland, and Timm Weitkamp, a scientist at the Synchrotron SOLEIL in France, the team explored which method performs best in terms of spatial resolution and visualization/quantification of relevant features in the samples. They also investigated other related factors such as the simplicity of the setup, and the data acquisition and analysis involved in each method.

To do this, the researchers chose to exploit synchrotron radiation, which produces significantly higher-quality X-rays than conventional X-ray generators such as those found in hospitals.

What exactly is synchrotron radiation? “Think of synchrotron radiation as being analogous to the sort of monochromatic, collimated and intense light produced by lasers, while conventional X-ray generators in hospitals are more analogous to light bulbs we use within our homes,” explained Zanette, currently a postdoctoral scientist in biomedical physics at TUM in Germany. 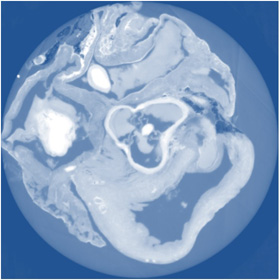 Importantly, she pointed out, while their study was performed using synchrotron radiation, the same techniques are amenable to both polychromatic and divergent beams and can also be implemented at conventional X-ray sources.

The researchers used an advanced X-ray technique known as “phase-contrast imaging.” This type of imaging works by making the X-ray beam interfere while it propagates from sample to detector, according to Zanette. “This interference is fundamental because it encodes precious information on the phase of the X-ray waves.”

By comparison, conventional X-ray imaging—of the sort performed at hospitals and airports—doesn’t use phase information. Rather, it relies only on the attenuation of the amplitude (reduction in intensity) of the X-ray waves by the object under study to generate image contrast.

“More detailed information is contained in the phase than the amplitude, so it enables us to obtain images with much greater contrast and clearly differentiates cancerous tissue from healthy tissue,” Zanette said.

So what did they find by comparing methods? The group was able to show that for each specimen, the spatial resolution derived from the characteristic morphological features is about twice as good for holotomography and single-distance phase reconstruction compared to X-ray grating interferometry. They also found that X-ray grating interferometry data generally provide much better contrast-to-noise ratios for anatomical features, excel in fidelity of the density measurements, and are more robust against low-frequency artifacts than holotomography. 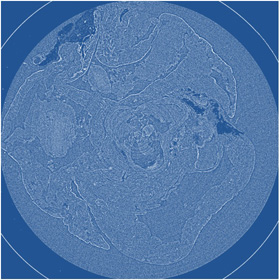 It turns out that the group regards all three of the phase tomography methods as being complementary. “The application determines which spatial and density resolutions are desired for the imaging task and dose requirements, so it really comes down to a choice between the complexity of the experimental setup and the data processing,” noted Müller. “It’s important to choose the ideal technique for your specific purposes.”

Since synchrotron radiation is of higher quality than the radiation at conventional sources, measurements at synchrotrons represent benchmarking experiments when translating these tomography techniques to clinical practice—especially X-ray grating interferometry, which is attracting attention for use in hospitals.

“Our research should help provide guidance for other researchers in developing an ideal phase-contrast imaging method, which will be adopted by hospitals in the future,” Zanette said.

The authors of this paper are affiliated with Technische Universität München in Germany, Biomaterials Science Center in Switzerland, and Synchrotron SOLEIL in France.