In APL-Materials Paper, Researchers Show how to Keep Cathode Material ‘In Line’ to Enhance Performance

WASHINGTON D.C. Nov. 19, 2013 — The ever-increasing market for portable electronic devices such as laptops, cell phones and MP3 players has resulted in an equally heavy demand for secondary batteries — more commonly known as rechargeable batteries — Lithium-ion (Li-ion) being among the most popular.

Scientists and engineers worldwide are seeking ways to improve the power density, durability and overall performance of Lithium-ion batteries, and in a recent paper in the AIP Publishing journal APL Materials, Japanese researchers from a public-private team report an advance in Li-ion battery technology that they describe as a major breakthrough. They fabricated a cathode (positive electrode) of lithium cobalt oxide (LiCoO2) in which the compound’s individual grains are aligned in a specific orientation. The researchers claim that this yields a significantly higher-performing battery than one with a randomly-oriented LiCoO2 cathode. 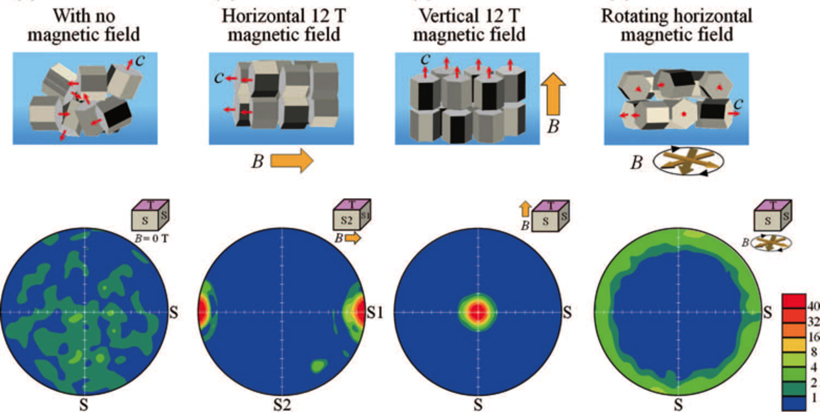 Primary, or non-rechargeable, batteries and secondary batteries both produce current through an electrochemical reaction involving a cathode, an anode, and an electrolyte (an ion-conducting material). However, apply an outside current to a secondary battery and the negative-to-positive electron flow that occurs during discharge is reversed. This allows the battery to restore lost charge.

“In a lithium-ion battery, lithium ions move from the anode to the cathode during discharge and back when charging,” said Tohru Suzuki, a co-author on the APL Materials paper. “The material in the cathode has a layered structure to facilitate intercalation [insertion] of the lithium ions; if the structure is oriented in a specific fashion, the lithium ions have better access to the lattice and, in turn, charge-discharge performance is improved.”

Using a rotating magnetic field, the researchers were able to fabricate the ideal textured microstructure of the individual LiCoO2 grains making up the cathode: a perpendicular alignment of the c-plane (the vertical side) and a random orientation of the c-axis. Unlike cathodes where the microstructures in both the c-plane and c-axis are randomly oriented, the specialized grains allow easy access for lithium ions while relaxing the stress associated with intercalation.

“This yields a highly efficient flow of electrons in both directions,” Suzuki said.