WASHINGTON, D.C., August 11, 2015 – Urinary tract infections can quickly move from being a merely miserable experience to a life-threatening condition. Untreated cases may trigger sepsis, which occurs when the immune system, in an attempt to fight off the infection, inadvertently activates body-wide inflammation that can cause blood clots and leaky blood vessels.

Sepsis is a major killer and accounts for about half of the hospital deaths in the US by some estimates. Hospital patients often acquire urinary tract infections via infected catheters and so untreated infections are a huge problem faced by healthcare providers around the world.  Early diagnosis could save lives and reduce healthcare costs. With this motivation in mind, a team of researchers in Germany and Ireland set out to speed up the detection process for bacteria that cause urinary tract infections.

In the journal Biomicrofluidics, from AIP Publishing, the team describes creating a Lab-on-a-Disc platform that combines microfluidics and Raman microscopy, a modern optical detection method.

Their medical diagnostics device is designed to harness centrifugal force — akin to the circular swing of a “Chair-o-Plane” carnival ride, in which a fast rotation creates a force that causes the seats to drift radially away from the ride’s center — to capture the tiny bacteria directly from patients’ samples of bodily fluids…in this case, urine.

The work involves extremely small sample sizes, on the scale of a small raindrop, so the device needed to be a microfluidic one. 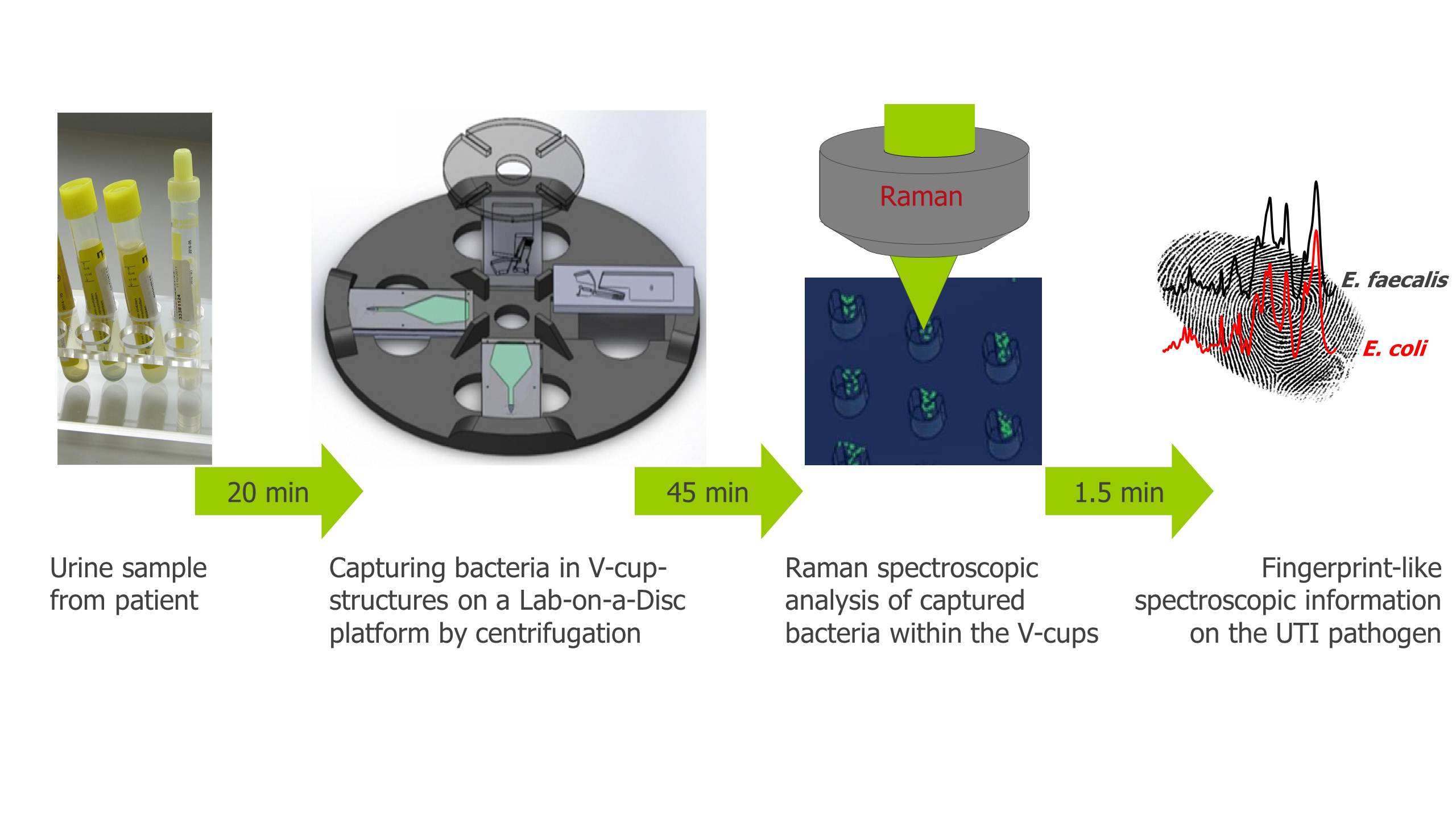 “Our device works by loading a few microliters of a patient’s urine sample into a tiny chip, which is then rotated with a high angular velocity so that any bacteria is guided by centrifugal force through microfluidic channels to a small chamber where ‘V-cup capture units’ collect it for optical investigation,” explained Ulrich-Christian Schröder, a Ph.D. student at the Jena University Hospital and Leibniz Institute of Technology in Germany.

The team’s concept then adds Raman spectroscopy to its centrifugal microfluidic platform. “Raman spectroscopy uses the way light interacts with matter to produce ‘unique scattering,’ the equivalent of a molecular fingerprint, which can then be used to identify the types of bacteria present,” said Ute Neugebauer, group leader at the Jena University Hospital and Leibniz Institute of Technology.

What exactly does the team’s medical device detect? “In our pilot study, we were able to identify Escherichia coli (more commonly known as E. coli) and Enterococcus faecalis — two species known to cause urinary tract infections — within 70 minutes, directly from patients’ urine samples,” said Schröder.

The speedy diagnosis marks a tremendous reduction in the wait time compared to the lengthy lag — often 24 hours or more — associated with methods routinely used to identify bacteria and diagnose urinary tract infections today, so the team’s device shows great potential for improving the future of medical diagnostics.

The team envisions general practitioners, a.k.a. family doctors, using the device to rapidly — while a patient waits — identify the bacteria causing an infection directly within the patient’s bodily fluid so that they can prescribe the appropriate medication and treatment. “Our pilot study brings us a step closer toward realizing this vision,” said Neugebauer.

The team will continue toward its goal of developing an easy-to-use spectroscopy-based point-of-care medical device for fast and reliable diagnostics. “The next step will involve implementing antibiotic susceptibility testing and automating the sample pre-treatment steps,” Neugebauer explained. “Our ultimate vision is to apply the concepts behind our device to enable diagnostics devices for use with other bodily fluids.”