Researchers have constructed a model that incorporates a cost function to explore the behavior of cow herds.

WASHINGTON, D.C., June 20, 2017 — The image of grazing cows in a field has long conjured up a romantic nostalgia about a relaxed pace of rural life. With closer inspection, however, researchers have recognized that what appears to be a randomly dispersed herd peacefully eating grass is in fact a complex system of individuals in a group facing differing tensions. A team of mathematicians and a biologist has now built a mathematical model that incorporates a cost function to behavior in such a herd to understand the dynamics of such systems.

Complex systems research looks at how systems display behaviors beyond those capable from individual components in isolation. This rapidly emerging field can be used to elucidate phenomena observed in many other disciplines including biology, medicine, engineering, physics and economics.

“Complex systems science seeks to understand not just the isolated components of a given system, but how the individual components interact to produce ‘emergent’ group behaviour,” said Erik Bollt, director of the Clarkson Center for Complex Systems Science and a professor of mathematics and of electrical and computer engineering.

Bollt conducted the work with his team, lead-authored by post-doctoral fellow Kelum Gajamannage, which was reported this week in the journal Chaos, from AIP Publishing.

“Cows grazing in a herd is an interesting example of a complex system,” said Bollt. “An individual cow performs three major activities throughout an ordinary day. It eats, it stands while it carries out some digestive processes, and then it lies down to rest.”

While this process seems simple enough, there is also a balancing of group dynamics at work.

“Cows move and eat in herds to protect themselves from predators,” said Bollt. “But since they eat at varying speeds, the herd can move on before the slower cows have finished eating. This leaves these smaller cows facing a difficult choice: Continue eating in a smaller, less safe group, or move along hungry with the larger group. If the conflict between feeding and keeping up with a group becomes too large, it may be advantageous for some animals to split into subgroups with similar nutritional needs.” 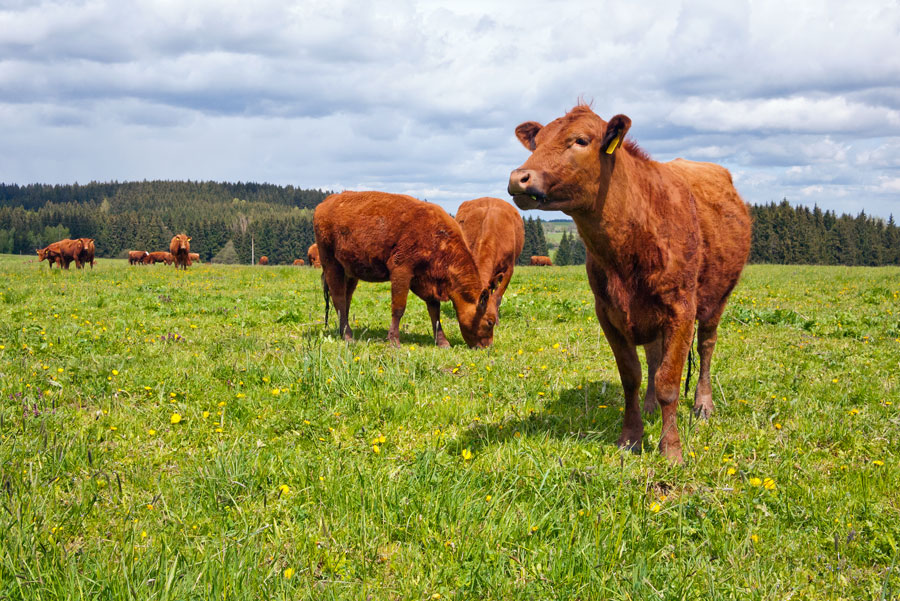 Bollt and his colleagues incorporate a cost function into their model to capture these tensions. This adds mathematical complexity to their work, but it became apparent that it was necessary after discussing cows’ behavior with their co-author, Marian Dawkins, a biologist with experience researching cows.

“Some findings from the simulation were surprising,” Bollt said. “One might have thought there would be two static groups of cows — the fast eaters and the slow eaters — and that the cows within each group carried out their activities in a synchronized fashion. Instead we found that there were also cows that moved back and forth between the two.”

“The primary cause is that this complex system has two competing rhythms,” Bollt also said. “The large-sized animal group had a faster rhythm and the small-sized animal group had a slower rhythm. To put it into context, a cow might find itself in one group, and after some time the group is too fast. Then it moves to the slower group, which is too slow, but while moving between the two groups, the cow exposes itself more to the danger of predators, causing a tension between the cow’s need to eat and its need for safety.”

The existing model and cost function could be used as a basis for studying other herding animals. In the future, there may even be scope to incorporate it into studies about human behavior in groups. “The cost function is a powerful tool to explore outcomes in situations where there are individual and group-level tensions at play,” said Bollt.