WASHINGTON D.C., June 2, 2015 — The electromagnetic radiation discharged by electronic equipment and devices is known to hinder their smooth operation. Conventional materials used today to shield from incoming electromagnetic waves tend to be sheets of metal or composites, which rely on reflection as a shielding mechanism.

But now, materials such as graphene aerogels are gaining traction as more desirable alternatives because they act as electromagnetic absorbers. They’re widely expected to improve energy storage, sensors, nanoelectronics, catalysis and separations, but graphene aerogels are prohibitively expensive and difficult to produce for large-scale applications because of the complicated purification and functionalization steps involved in their fabrication.

So a team of researchers in China set out to design a cheaper material with properties similar to a graphene aerogel—in terms of its conductivity, as well as a lightweight, anticorrosive, porous structure. In the journal Applied Physics Letters, from AIP Publishing, the researchers describe the new material they created and its performance.

They chose to concentrate on this method because it enables them to “regulate the density and dielectric property of conducting polymers through the formation of pores during the oxidation polymerization of the pyrrole monomer,” explained Wu.

And the fabrication process is a simple one. “It requires only four common chemical reagents: pyrrole, ferric chloride (FeCl3), ethanol and water — which makes it cheap enough and enables large-scale fabrication,” Wu said. “We’re also able to pour the FeCl3 solution directly into the pyrrole solution — not drop by drop — to force the pyrrole to polymerize into a 3-D aerogel rather than PPy particles.”

In short, the team’s 3-D PPy aerogel is designed to exhibit “desirable properties such as a porous structure and low density,” Wu noted. 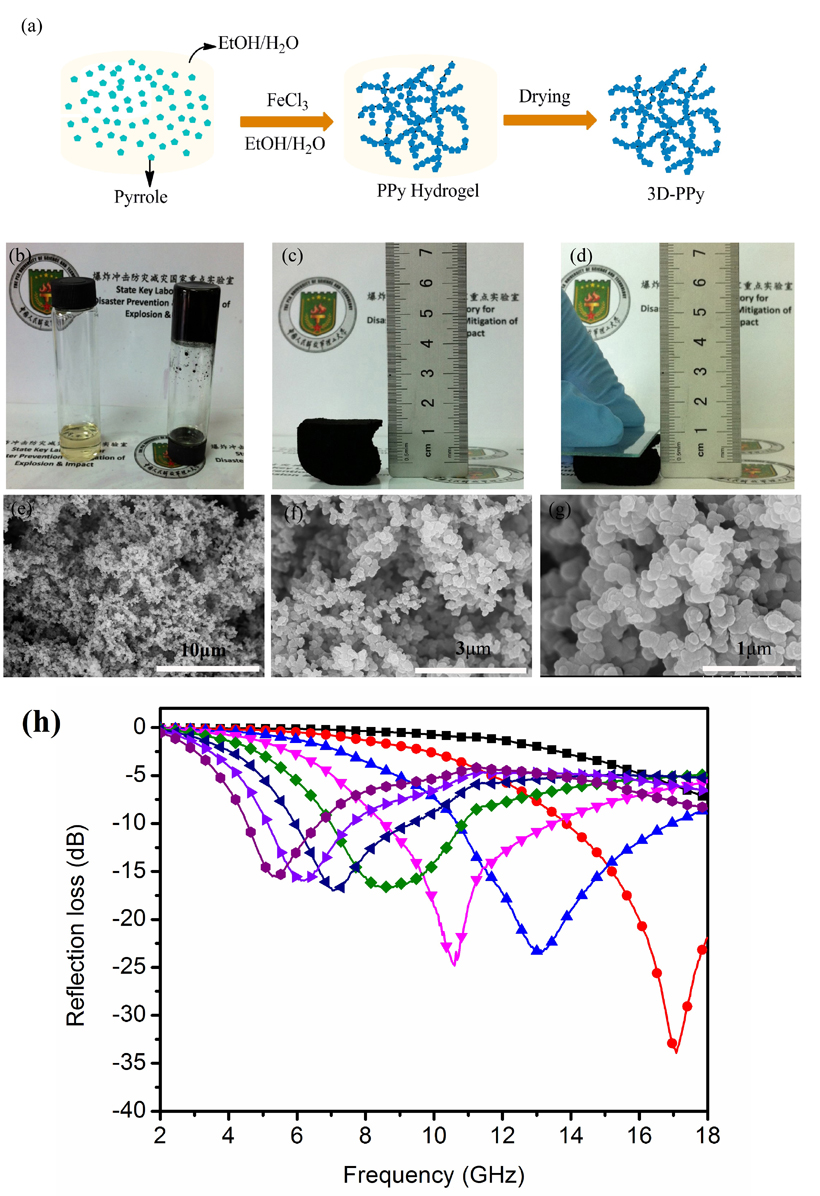 Beyond that, its electromagnetic absorption performance — with low loss — shows great promise. “We believe a ‘wide’ absorption range is more useful than high absorption within one frequency,” Wu said. Compared with previous works, the team’s new aerogel has the lowest adjunction and widest effective bandwidth — with a reflection loss below -10 decibels.

In terms of applications, based on the combination of low adjunction and a “wide” effective bandwidth, the researchers expect to see their 3-D PPy aerogel used in surface coatings for aircraft.

Another potential application is as coatings within the realm of corrosion prevention and control. “Common anticorrosion coatings contain a large amount of zinc (70 to 80 percent by weight), and these particles not only serve as a cathode by corroding to protect the iron structure but also to maintain a suitable conductivity for the electrochemistry process,” Wu pointed out. “If our 3-D PPy aerogel could build a conductivity network in this type of coating, the loss of zinc particles could be rapidly reduced.”

The team is now taking their work a step further by pursuing a 3-D PPy/PEDOT-based (poly(3,4-ethylenedioxythiophene) electromagnetic absorber. “Our goal is to grow solid-state polymerized PEDOT particles in the holes of the 3-D PPy aerogel formed by PPy chains,” Wu added.