WASHINGTON, D.C., October 17, 2017 — Physicists from École Normale Supérieure and Paris Science and Letters University in France have proven theoretically that active sieving, as opposed to its passive counterpart, can improve the separation abilities of filtration systems. These new views on how active sieving could improve systems such as those used in water purification and dialysis were reported this week in The Journal of Chemical Physics, from AIP Publishing. Active sieving also has the potential to filter molecules based on movement dynamics, opening up a whole new avenue in the field of membrane science based on the ability to tune osmotic pressure.

Sieves, from kitchen colanders to complex dialysis machines, all have “passive” pores to filter out unwanted molecules from the desired product. While straining spaghetti is a simple example, the filtering of specific molecules on the nanoscale level for biomedical applications and for production of clean water is a complex and costly process. Any improvements to this process are the subject of much investigation.

Active sieving replaces the passive holes in a sieve with doorlike openings that open and close according to external commands. These active pores can precisely discriminate between molecules and be switched on and off depending on the exact sieving conditions. Therefore, active sieving gives a level of dynamic control that we do not possess in current filtration systems.

The researchers investigated a few types of external commands to control the doors of a sieve’s pores, including a mechanical ‘shake’ and an electrical signal to change the charge guarding the doorways.

“We put together a general framework to describe holes in the membrane that have some kind of dynamic aspect to them that you could externally modify,” said Sophie Marbach at the École Normale Supérieure. “It’s an exciting proposition because it is a new concept and we don’t know what it is going to lead to.” 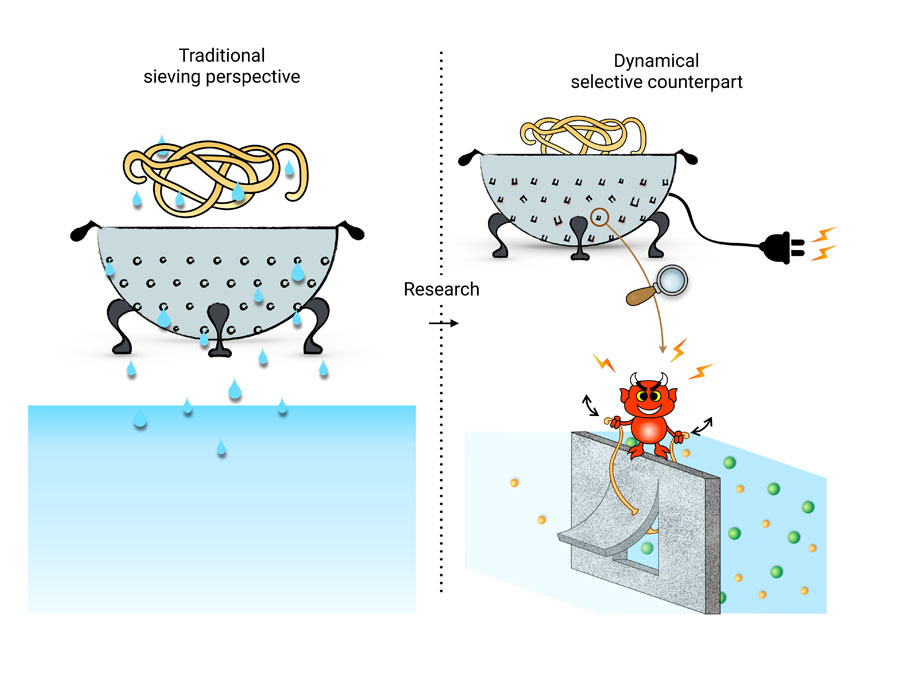 One of the possibilities is that molecules could be actively sorted, i.e., sort the fast-moving molecules separately from the slow based on their dynamic properties. This would be helpful in making fine distinctions between very similar molecules and is already known to occur in nature. For instance, the KscA pore, a potassium channel found in soil bacteria, is thought to select potassium using its speed to distinguish it from the very similar sized and charged sodium.

“Because the theoretical framework is at an early stage it is not obvious to know the consequences of what will happen,” Marbach said. “There are a lot of theoretical questions lingering around.”

The researchers acknowledge funding from a J.-P. Aguilar grant of the CFM Foundation.