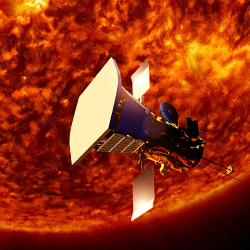 This Special Topic commemorates the legacy of Eugene Parker and highlights new understandings of the plasma physics of the Sun resulting from the observations, analyses, and plans for the Parker Solar Probe (PSP) and Solar Orbiter Missions. In recognition of Eugene Parker’s remarkable insights and many contributions, we welcome papers in theoretical, computational, and observational heliophysics and astrophysics. We especially encourage papers written to bring the physics of the Sun to the broader plasma physics community. These include papers building upon the capabilities of the PSP and Solar Orbiter spacecraft, presenting new understandings of coronal processes, solar wind structure and dynamics, transient events including nanoflares, and developing fundamental insights into stellar equilibrium and flows.

Topics covered include, but are not limited to:

Both invited and contributed manuscripts to the Special Topic: Plasma Physics of the Sun in Honor of Eugene Parker are welcome for submission.

Manuscripts considered for publication in the Physics of Plasmas are expected to meet the journal’s standard of acceptance: to report on original and timely results that significantly advance understanding in observational, computational, and theoretical plasma physics. Manuscripts submitted for consideration in this Special Topic must meet the same criteria and will undergo the journal’s standard peer-review process. The Editorial Team of the Physics of Plasmas will issue final decisions on the submitted manuscripts. Manuscripts will publish in an issue after acceptance and collected together with a Preface prepared by the Guest Editors to highlight this important and timely area. For more information on the journal’s editorial policies, please click here.

Authors may include a dedication (maximum 65 words) to the late Eugene Parker and his scientific legacy. Dedications should be included as a separate section in your manuscript labeled “Dedication” just before the Acknowledgements section.

Manuscripts must be submitted through the Physics of Plasmas’ online submission system (PXP). Please select the Special Topic “Plasma Physics of the Sun in Honor of Eugene Parker” to submit your manuscript for consideration in this Special Topic.