Researchers find that a droplet hitting a thin fiber will be captured at low speeds, pass through at intermediate speeds, and split at high speeds.

WASHINGTON, D.C., April 12, 2016 – If you go out after a rain, you may notice spider webs glistening with water droplets. The soggy webs resemble human-made meshes for fog collection: They both have thin fibers that collect water from droplets in the air.

Now researchers from Sogang University in Seoul, South Korea have developed a model to predict whether a falling droplet will stick to a thin fiber, and how much water residue will remain on the fiber. They discuss their findings in this week’s Physics of Fluids, from AIP Publishing.

“Engineers will apply our results to control the amount of liquid retained on fibers for water-collection from foggy air, air-filtration, and fiber-coating technologies,” said Wonjung Kim, a mechanical engineer at Sogang University. “To our best knowledge, this is the first quantitative study of the remnant mass on the fiber after collision.” 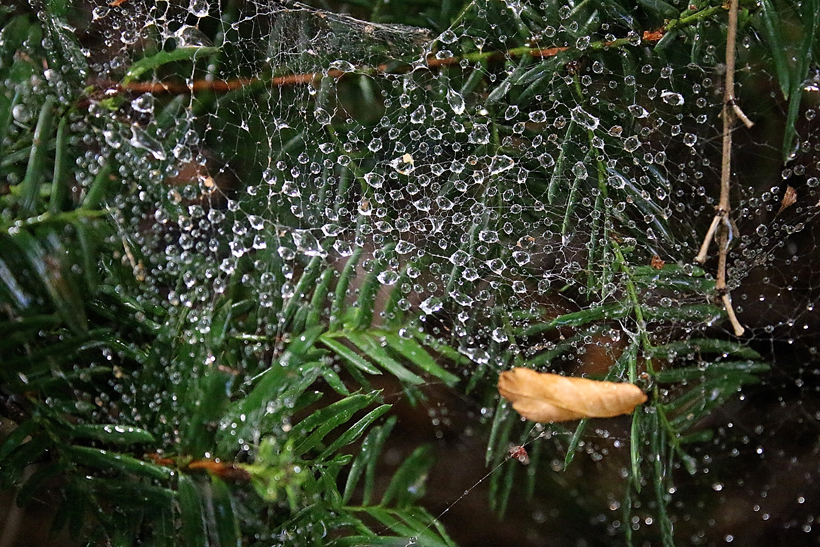 Kim and his student Sung-Gil Kim were inspired by a picture of a spider web covered with water after a rain shower. “[The picture] raised some questions: What happens if a droplet impacts a thin fiber? What amount of rain droplet will remain on the fiber?” Kim said.
The researchers set about answering their questions by building an experiment to capture high-speed video of water droplets hitting a copper wire. They dropped 2.7 mm-diameter water droplets from a syringe at a series of heights above the wire. The higher the syringe, the faster the droplet’s impact speed. The researchers also varied the copper wire thickness, from 20 micrometers to 1000 micrometers.

When a water droplet hit the wire, one of three things happened: The droplet jiggled, but ultimately stuck to the wire, the droplet fell from the wire mostly intact, or the droplet split.

For a droplet of a given size, the outcome is determined by how fast it’s moving and the wire thickness.

At high impact speeds, more than 2 meters per second, the droplets split. At lower speeds, the droplets were either captured or fell as one big drop, depending on the wire thickness. The thick wires captured drops at higher speeds than the thin wires.

In some ways, the splitting of the water droplets was a surprise. “There is a Korean idiom ‘cutting through water with a knife,’ meaning a vain attempt, because a body of liquid cannot be split by a knife. But our results show a very thin fiber can split a droplet, probably contrary to intuition,” Kim said.

The researchers also weighed the wire after the droplet struck it to see how much water stuck to the wire. In cases where the droplet didn’t stick, the remnant mass is determined mainly by the wire thickness, and is negligibly affected by impact speed. Kim noted that this could be important for maximizing the productivity of water collection systems. Because full droplet capture only happens at low speeds, it could ultimately be more effective to capture a percentage of the water passing through at a higher speed.

The speeds at which droplets are captured or split are specific to the researchers’ set-up. They then generalized the results by analyzing the forces at play when the drop hits the wire. The inertia of a heavy, fast moving drop will pull it off the wire, while surface tension will make it stick. The droplet’s fate is governed by the properties of the liquid, like density, speed, and size, and the droplet to wire radius ratio.

Most of the practical applications for this study rely on fiber meshes, not copper wire. Moving forward, the researchers plan to study drop impact on complex fiber arrays.

Drop impact on a fiber