WASHINGTON, D.C., May 2, 2017 — When spacecraft and satellites travel through space they encounter tiny, fast moving particles of space dust and debris. If the particle travels fast enough, its impact appears to create electromagnetic radiation (in the form of radio waves) that can damage or even disable the craft’s electronic systems.

A new study published this week in the journal Physics of Plasmas, from AIP Publishing, uses computer simulations to show that the cloud of plasma generated from the particle’s impact is responsible for creating the damaging electromagnetic pulse. They show that as the plasma expands into the surrounding vacuum, the ions and electrons travel at different speeds and separate in a way that creates radio frequency emissions.

“For the last few decades researchers have studied these hypervelocity impacts and we’ve noticed that there’s radiation from the impacts when the particles are going sufficiently fast,” said lead author Alex Fletcher, now a postdoctoral researcher at the Boston University Center for Space Physics. “No one has really been able to explain why it’s there, where it comes from or the physical mechanism behind it.”

The study is a step towards verifying the theory of senior author Sigrid Close, associate professor of aeronautics and astronautics at Stanford University. In 2010, Close and colleagues published the initial hypothesis that hypervelocity impact plasmas are responsible for a few satellite failures.

To simulate the results from a hypervelocity impact plasma, researchers used a method called particle-in-cell simulation that allows them to model the plasma and the electromagnetic fields simultaneously. They fed the simulation details from a previously developed hydrocode — a computational tool they used to model the fluid and solid dynamics of the impact. The researchers let the simulation evolve and calculated the radiation produced by the plasma.

When a particle hits a hard surface at high speeds, it vaporizes and ionizes the target, releasing a cloud of dust, gas and plasma. As the plasma expands into the surrounding vacuum (of space), its density drops and it enters a collisionless state where its particles no longer interact directly with one another.

In the current study, the researchers make the assumption that the electrons in this collisionless plasma then travel faster than the larger ions. Their simulation predicts that this large-scale charge separation generates the radiation. The model’s results are consistent with Close’s initial theory, but predict a higher frequency for the emission than researchers have detected experimentally. 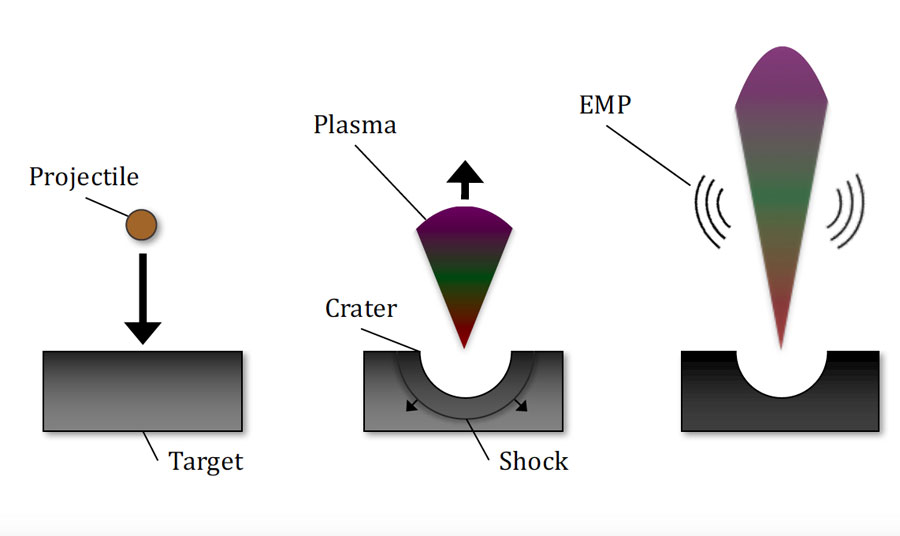 The authors point out that the assumption that the electrons move en masse as they separate from the ions deserves more careful attention. The group is building new simulations to test whether the shift to a collisionless state is sufficient to create the separation.

Fletcher also notes that they have neglected to account for the dust.

“The impact creates dust particles that interact with the plasma,” Fletcher said. The dynamics of these “dusty plasmas” are an area for future research.

The next step in the work is to use the simulation to quantify the radiation generated so they can assess the threat to satellites, and devise ways to protect satellites and spacecraft from meteoroids and orbital debris.

“More than half of electrical failures are unexplained because it’s very hard to do diagnostics on a satellite that fails in orbit,” Fletcher said. “We believe we can attribute some of these failures to this mechanism.”