Researchers find that a universe that contains some big objects and many small objects relieves gravitational tension faster than a uniform universe.

WASHINGTON, D.C., March 1, 2016 – Our solar system contains one massive object – the sun – and many smaller planets and asteroids. Now researchers from Duke University in Durham, N.C. have proposed a new explanation for the size diversity, which is found throughout the universe and is called hierarchy. The researchers report their finding in the Journal of Applied Physics, from AIP Publishing.

“Since the 1700s scientists have known that gravity causes objects in the universe to get bigger, but the phenomenon of growth does not explain the hierarchy,” said Adrian Bejan, a professor of mechanical engineering at Duke University. “To my huge surprise this question has been overlooked.”

Bejan’s specialty is in thermodynamics and he is the author of the Constructal Law, which states that natural systems evolve to facilitate flow. He had already applied the law of evolution to explain the shape of snowflakes, river basins, lungs and even airplanes, when a conversation with an undergraduate student prompted him to consider how the Constructal Law would manifest itself in the cosmos.

“This is my first trespass into planetary science,” he said. 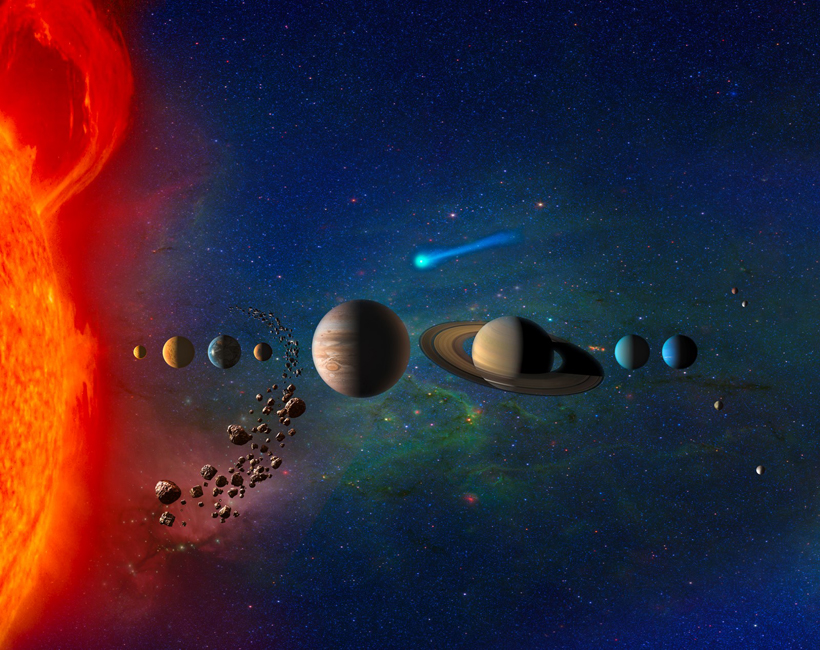 Bejan and his student, Russell Wagstaff, started by calculating the tension caused by gravitational attraction between bodies of the same size, uniformly distributed in space. They showed that if the bodies coalesce into some large bodies and some small bodies, the tension is reduced faster than if the bodies merged uniformly.

“The discovery is that hierarchy ‘snaps’ from the very beginning, spontaneously,” Bejan said. The break-up of the uniform suspension of bodies into a few large and many small bodies occurs because it’s the fastest way to ease the internal tension caused by gravity, he said.

The natural tendency of a system to evolve toward a state of reduced tension is a manifestation of the Constructal Law, Bejan said, and can be seen in other phenomena, such as soil cracking under a drying wind. “The working title for our paper was actually ‘The Universe as Cracked Mud,’” he said.

Bejan said he hopes the application of the Constructal Law to the cosmological scale will inspire other researchers to consider how the law could be applied in their own fields.

“I never thought I would have anything to say about celestial bodies in pure physics, but by chance I realized I have a key to open a new door,” he said. “Everything has evolution and the Constructal Law can help predict it. The plan is to keep exploring.”

The physics origin of the hierarchy of bodies in space

A. Bejan and R.W. Wagstaff