WASHINGTON D.C., April 22, 2014 — A team of researchers in Japan has developed a solid-state lamp that emits high-energy ultraviolet (UV) light at the shortest wavelengths ever recorded for such a device, from 140 to 220 nanometers. This is within the range of vacuum-UV light — so named because while light of that energy can propagate in a vacuum, it is quickly absorbed by oxygen in the air.

This fact makes vacuum UV light extremely useful for industrial applications from sterilizing medical devices to cleaning semiconductor substrates because when it strikes oxygen-containing molecules on a surface, it generates highly reactive oxygen radicals, which can completely destroy any microbes contaminating that surface.

Existing commercial vacuum UV lamps are bulky and expensive, however. They also use a lot of power, run hot, have short lifetimes and contain toxic gasses that can pollute the environment and harm people. The new lamp avoids those issues because it was fabricated with a solid-state phosphor made from a thin film of KMgF3, which is easy to make, avoids the use of toxic gasses and does not require expensive rare earth elements.

In AIP Publishing’s journal APL-Materials, the Japanese team describes how this solid-state phosphor promises to make future, low-power vacuum UV lamps that will be more flexible in design as well as being smaller, longer lasting and relatively heat-free — all traits that are typical advantages of solid state lighting in general. 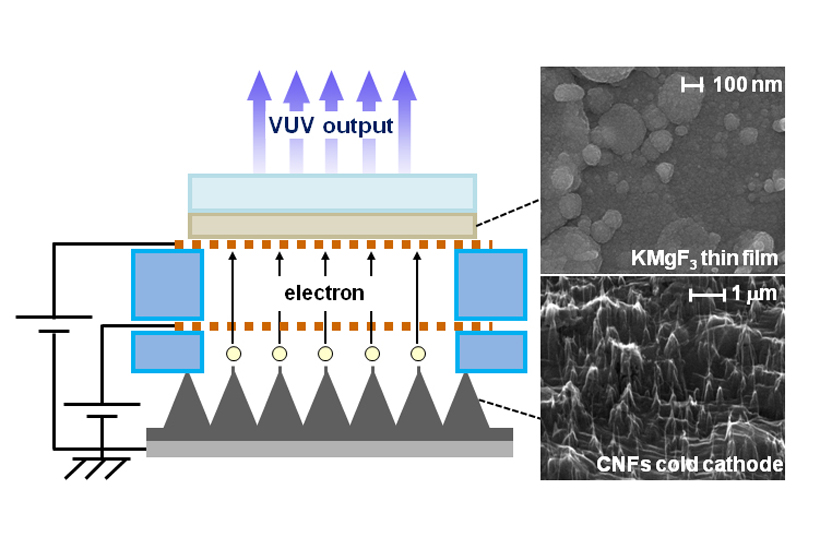 “Our lamp is a promising light source in terms of lifetime, size, heat conduction and stability,” said Shingo Ono of the Nagoya Institute of Technology in Japan, who led the research. “[It] has the potential to be an excellent alternate light source to low-pressure mercury lamps, excimer lamps and deuterium lamps.”

One of the hurdles they faced was to safely fabricate the phosphor using a compound containing fluoride, which is itself a toxic, corrosive and potentially dangerous chemical to handle. One way would have been to use an inflow of gaseous fluoride to coat the surface of the KMgF3 thin film, but instead the team discovered a safer route to fabricating it with pulsed laser deposition — a way of layering thin films of chemicals onto surfaces through irradiation with a focused laser beam.