WASHINGTON, DC, March 31, 2015 – We’d like to believe that our opinions are nuanced, balanced, high-minded, wise and above all, unique, but alas they are not — or so says Twitter. Most often, those we engage with on the popular social media site are like-minded, and the ensuing electronic maelstrom of 140-character missives most often serves to reinforce, pulling us and them further along in the direction we were already trending toward — so that at the end of the day, we all Tweet to the converted.

All that sound and fury can signify something, however: researchers at Universidad Politécnica de Madrid in Spain have recently developed a model to detect the extent to which a conversation on Twitter — and thus the actual offline argument and political climate — is polarized.

According to the researchers, a group is “perfectly polarized” on a given topic when it has been divided into two groups of the same size holding opposite opinions. The death in 2013 of Venezuelan president Hugo Chavez, known to his supporters as El Comandante, provided an ideal case study, with opponents of the deceased politician suddenly emboldened to speak out and supporters stirred to eulogize and venerate.

“A politically polarized society implies several risks, such as the appearance of radicalism or civil wars. We were interested to find out how can political polarization be detected, and therefore be fixed,” said Rosa Maria Benito, a professor at Universidad Politécnica de Madrid.

This week in the journal Chaos, from AIP Publishing, Benito and her colleagues describe the construction and implications of their model, which can now be applied to any network to detect its degree of polarization.

Benito and her colleagues first developed a computational model to estimate the effect that a minority of influential individuals, or “elite users,” had on the opinion of any given user based on the average opinion of their neighbors. Predictably, most of these elite users were politicians, journalists and mass media accounts with well-known political positions. The model yielded an opinion distribution, which gives the probability that a random individual has a given opinion. The researchers then proposed an index to quantify the extent of the polarization of the resulting distribution.

“The index is inspired by the electrical dipole moment of a molecule,” said Benito. “We quantify the distance between the two opinions by determining the gravity center of the positive and negative opinions.”

Benito and her colleagues downloaded over 16,383,490 messages written by 3,173,090 Twitter users from one month before and one month after Chavez’s death on March 5, 2013, a total of 56 days. They used these messages to create retweet networks, in which retweets could be considered a proxy for influence and adoption of ideas, and applied their model and polarization index to the networks.

Once assembled, this confluence of data gave them a day-by-day breakdown of the extent of political polarization in Venezuela over the course of 56 days. The researchers found that during the most critical days of the conversation — between Chavez’s death and state funeral — polarization dropped to its lowest levels, due to the fact that foreign users joined the conversation. This temporarily caused the polarized structure of the network to disappear until the political electoral campaign began six days later.

Benito and her colleagues then plotted the geo-located Tweets on a map of Caracas, the Venezuelan capital, and compared the polarity expressed — officialism or opposition — with the voting records and political affiliations of each municipality, finding a strong correlation between the two. This same approach could be applied to make political “polarization maps” of other cities as well. 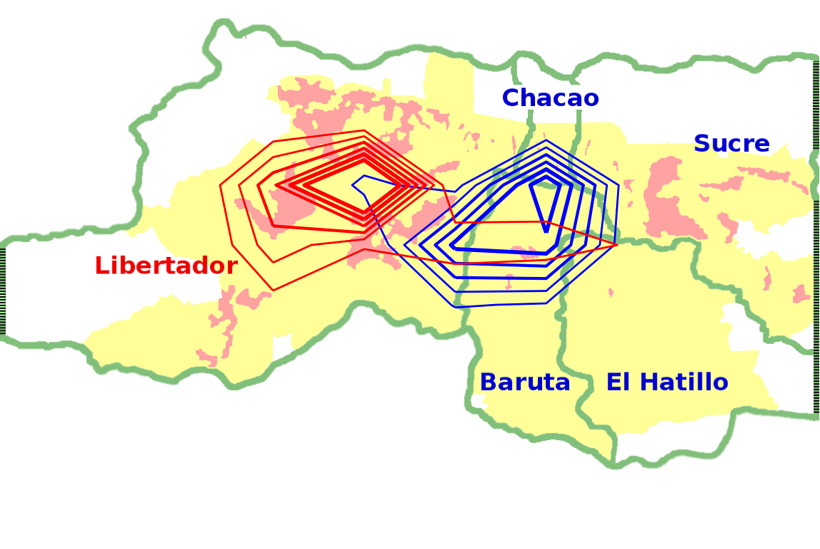