WASHINGTON D.C., June 17, 2014 – Take a fine strand of silica fiber, attach it at each end to a slow-turning motor, gently torture it over an unflickering flame until it just about reaches its melting point and then pull it apart. The middle will thin out like a piece of taffy until it is less than half a micron across — about 200 times thinner than a human hair.

That, according to researchers at the Joint Quantum Institute at the University of Maryland, is how you fabricate ultrahigh transmission optical nanofibers, a potential component for future quantum information devices, which they describe in AIP Publishing’s journal AIP Advances.

Quantum computers promise enormous power, but are notoriously tricky to build. To encode information in qubits, the fundamental units of a quantum computer, the bits must be held in a precarious position called a superposition of states. In this fragile condition the bits exist in all of their possible configurations at the same time, meaning they can perform multiple parallel calculations.

The tendency of qubits to lose their superposition state too quickly, a phenomenon known as decoherence, is a major obstacle to the further development of quantum computers and any device dependent on superpositions. To address this challenge, researchers at the Joint Quantum Institute proposed a hybrid quantum processor that uses trapped atoms as the memory and superconducting qubits as the processor, as atoms demonstrate relatively long superposition survival times and superconducting qubits perform operations quickly.

“The idea is that we can get the best of both worlds,” said Jonathan Hoffman, a graduate student in the Joint Quantum Institute who works in the lab of principal investigators Steven Rolston and Luis Orozco. However, a problem is that superconductors don’t like high optical power or magnetic fields and most atomic traps use both, Hoffman said.

This is where the optical nanofibers come in: The Joint Quantum Institute team realized that nanofibers could create optics-based, low-power atom traps that would “play nice” with superconductors. Because the diameter of the fibers is so minute — 530 nanometers, less than the wavelength of light used to trap atoms — some of the light leaks outside of the fiber as a so-called evanescent wave, which can be used to trap atoms a few hundred nanometers from the fiber surface.

Hoffman and his colleagues have worked on optical nanofiber atom traps for the past few years. Their AIP Advances paper describes a new procedure they developed that maximizes the efficiency of the traps through careful and precise fabrication methods.

The group’s procedure, which yields an improvement of two orders of magnitude less transmission loss than previous work, focuses on intensive preparation and cleaning of the pre-pulling environment the nanofibers are created in.

In the fabrication process, the fiber is brushed through the flame to prevent the formation of air currents, which can cause inconsistencies in diameter to arise, as it is pulled apart and tapered down. The flame source is a mixture of hydrogen and oxygen gas in a precise two-to-one ratio, to ensure that water vapor is the only byproduct. The motors are controlled by an algorithm based on the existing work of a group in Vienna, which calculates the trajectories of the motors to produce a fiber of the desired length and profile.

Previous pulling methods, such as carbon dioxide lasing and chemical etching, were limited by the laser’s insufficient diameter and by a lesser degree of control over tapering length, respectively. 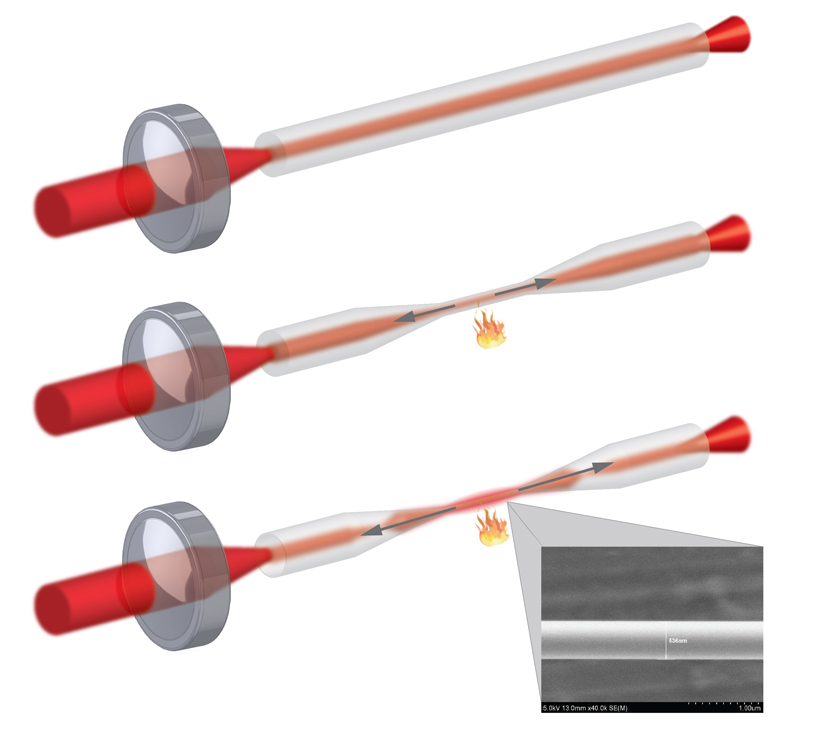 Future work includes interfacing the trapped atoms with the superconducting circuits held at 10 mKelvin in a dilution refrigerator, as well as guiding more complicated optical field patterns through the fiber (higher-order modes) and using these to trap atoms.

The Joint Quantum Institute at the University of Maryland