WASHINGTON, D.C., September 19, 2017 — Whispering gallery mode (WGM) resonators are used to make tiny micro-lasers, sensors, switches, routers and other devices. These tiny structures rely on a phenomenon similar to an effect observed in circular galleries, such as in some cathedrals or museums, where sound waves travel across the gallery and are reflected and refocused tightly enough that a whisper on one side can be heard on the other.

The same phenomenon applies to light. When light is stored in ring-shaped or spherical active resonators, the waves superimpose in such a way that it can result in laser light. This week in APL Photonics, by AIP Publishing, investigators report a new type of dye-doped WGM micro-laser that produces light with tunable wavelengths. Not only is the tuning range of the new devices broader than has been possible in the past, it is completely reversible.

A unique feature of the design, according to lead author Tobias Siegle of Karlsruhe Institute of Technology in Germany, is that tuning is made possible by changing the size of a flexible substrate. Stretching the substrate changes the distance between the two sides of the split disk in the resonator and thus, the wavelength of the light produced.

The disk itself is typically about 25 microns across, with an initial gap between its two halves of roughly 2.5 microns, just 3 percent the diameter of a typical human hair. The disk is mounted on an elastomer, or stretchy plastic substrate, which can be pulled in a direction perpendicular to the disk’s split, decreasing the gap size. The light produced by these micro-lasers shifts toward the blue range of the spectrum when the gap size decreases. They observed wavelength shifts of several nanometers in the visible range.

“Our new design produces a broad tuning range that cannot be easily achieved with other WGM resonators,” Siegle said. “Additionally, the tuning mechanism is completely reversible.”

This feature allows the device to be used in fundamental optics research. Another feature of the split-disk technology is enhanced sensitivity in refractive index sensing.

“For a gap width of 1.4 microns, the sensing performance is increased by 65 percent,” Siegle said, when comparing to a reference disk resonator without a gap.

The most useful devices have a low lasing threshold, since this allows the use of small amounts of energy. A low threshold reduces or prevents photo-bleaching of the dye molecules used in the device and increases its expected lifetime. The investigators tested their design and found low-threshold lasing for split disks fabricated using a 3-D or electron-beam lithography technique.

Another quantity they studied is the quality, or Q factor, which corresponds to the photon storage time in the laser cavity. A high Q value is desirable, and although investigators found that their split-disk design reduced Q somewhat, the lasing threshold was within an appropriate range, making the design valuable.

Future work will be focused on developing tunable coupled resonator waveguides, which can be used as optical delay lines or filters, and in other applications. 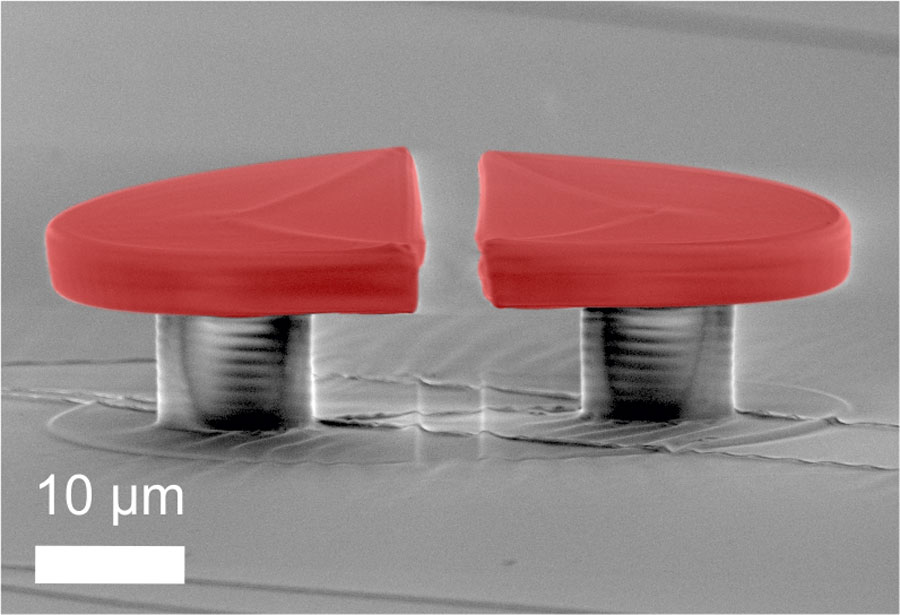