WASHINGTON D.C. July 22, 2014 — One of the traditional arguments against Darwinian evolution has been that no one can confirm the process exists because it occurs on a time scale immensely greater than a human lifetime. Adrian Bejan, the J. A. Jones Distinguished Professor of Mechanical Engineering at Duke University, has disagreed with that notion ever since 1996 when he discovered the Constructal Law, a fundamental principle of physics that underlies the evolution of flow systems as they change in design over time.

In a new paper in the Journal of Applied Physics, from AIP Publishing, Bejan and colleagues apply this now-famous law to airplanes, showing, as he said, “that we can witness evolution in our lifetime by documenting the evolution of a flow system that is a little more than a century old: the flying ‘human-and-machine species’.

For nearly two decades, Bejan has used the Constructal Law to show how each and every “tree-like” flow pattern, whether natural and manmade — e.g., rivers and basins, neural networks, lightning bolts, electrical circuitry, and of course, trees themselves — could all be linked in terms of how they change in design over time to maximize function. “Simply put,” Bejan said, “the Constructal Law states that for any finite-size flow system to persist, that is, be alive, it must evolve in such a way that it provides easier and easier access to its currents.”

In the Journal of Applied Physics paper, Bejan and colleagues examined aircraft designs dating to the beginning of manned flight. They noted that, like the flyers in nature (e.g, birds, bats, insects) throughout “Big History” (history from the Big Bang to the present), the evolutionary trend has been toward larger and larger size. “We showed that larger airplanes are faster, more efficient as vehicles, and have greater range,” Bejan said. “Engine mass is proportional to body mass, a design feature that is the same in animals where the mass of the motive organs — muscle, heart and lungs — is proportional to body mass.” 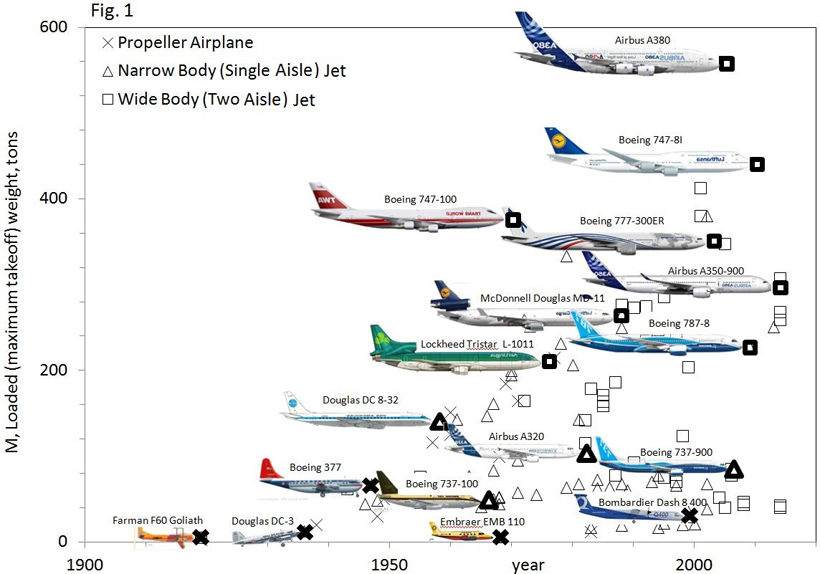 The researchers also showed that large or small, airplanes exhibit proportionality between wing span and fuselage length, and also between fuel load and body size. “This again is akin to what we see among the flying creatures in nature, showing that airplanes converge the architectural design rules that unite them with their living counterparts,” Bejan said.

Because the data in the latest study show that airplane design has followed an evolutionary path dictated by the Constructal Law, Bejan believes that it should be easy to predict the next stages. “Armies of aerospace designers,” he said, “are pushing the envelope, but guess what? The broad view of the future, which can now be predicted with the law of design in nature, says that new lines of aircraft will emerge along the lines discovered here.”

Bejan said that he hopes the new paper will help “demystify” evolution by showing it applies to everything, natural and manmade — and that “it is much broader than just biological evolution, and definitely belongs in physics.”

The evolution of airplanes