“We’ve identified a splashing behavior that nobody’s seen before,” said Yannis Hardalupas, one of the authors of this new research appearing in a cover article this week in the journal Physics of Fluids, from AIP Publishing.

Previous research has primarily examined droplet collisions with flat surfaces, such as a wall. This produced a taxonomy of droplet behaviors, from the “prompt splash” (the equivalent of a vernacular “splat”) to the stunning “crown splash.”

Hardalupas and colleague Georgios Charalampous examined the less studied case of a droplet having a head-on collision with a solid, spherical particle. The droplets were about one-fifth of a millimeter in diameter, a little wider than a human hair, and hit particles two to 10 times larger.

Their nanosecond-fast digital snapshots revealed that on impact some droplets embraced the particle in Saturn-like rings, or “crowns,” and then continued intact to the other end of the particle.

“What’s critical is that the crown stays coherent; it doesn’t break up as you would expect. The crown coheres until it gets to back of the particle,” Charalampous said of what they’ve named an “overpass” collision. “For the same size of droplet and the same size of particle, when the collision happens with the same velocity, it always behaves the same way.”

The researchers captured the novel droplet behavior using a high-tech photo shoot. This involved the equivalent of a micro-faucet of distilled water that used vibration to drip at a set rate and droplet size. The droplets fell onto a perfectly aligned tiny glass particle atop a steel needle. The collision dynamics were recorded in freeze-frame images using a microscope-mounted camera and a laser-induced fluorescence flash with exposures of a few billionths of a second.

“We couldn’t observe the pinch-off because of the supporting needle, but we expect that at the end the droplet would pinch off and reform because it’s moving fast enough to do that,” Hardalupas said.

The overpass droplet behavior occurs at a “sweet spot” in collisions with the smaller particles at which the crown holds together for long enough before instabilities have time to develop and rip it apart, according to Charalampous.

The fluid dynamics of droplet-particle collisions is critical to industrial spray drying, in which a slurry is atomized into droplets that are dried to produce a powder with standard-sized grains. In this study, the size and velocity of the droplets used resembled the droplet size from an atomizer, a size characteristic of detergent or instant coffee particles.

In an overpass collision, say the researchers, the critical aspect is that some of the liquid, and its contents, stays on the particle to coat and enlarge it, information that could inform more efficient spray drying.

“We’ve identified a range of operating conditions which include the speed and diameter of the droplets, which will give you better liquid deposition on the surface, and this provides guidelines for how it’s best to operate spray dryers,” Hardalupas said. 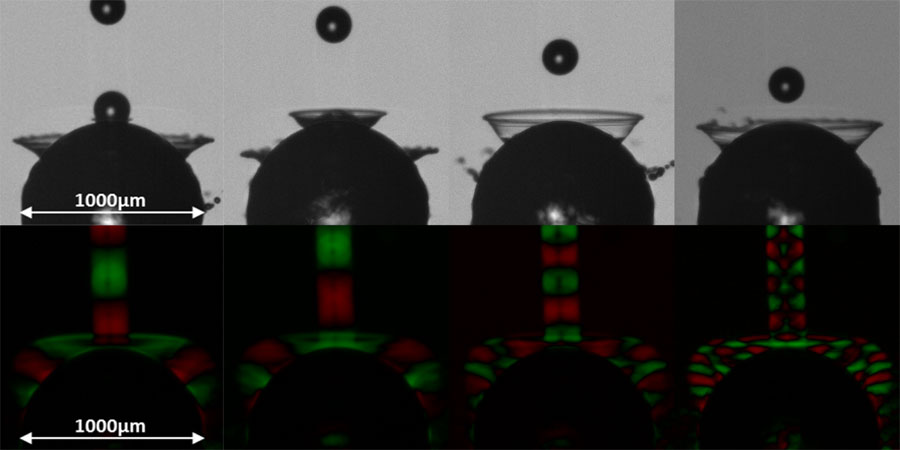 Collisions of droplets on spherical particles