WASHINGTON, D.C. Sept. 13, 2013 — A new, environmentally-friendly electronic alloy consisting of 50 aluminum atoms bound to 50 atoms of antimony may be promising for building next-generation “phase-change” memory devices, which may be the data-storage technology of the future, according to a new paper published in the journal Applied Physics Letters, which is produced by AIP Publishing. 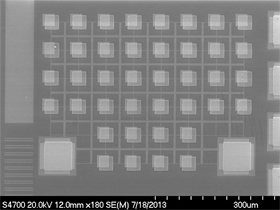 Flash memory has problems when devices get smaller than 20 nanometers. But a phase-change memory device can be less than 10 nanometers — allowing more memory to be squeezed into tinier spaces. “That’s the most important feature of this kind of memory,” said Xilin Zhou of the Shanghai Institute of Microsystem and Information Technology at the Chinese Academy of Sciences. Data can also be written into phase-change memories very quickly and the devices would be relatively inexpensive, he added.

So far, the most popular material for phase-change memory devices contains germanium, antimony, and tellurium. But compounds with three elements are more difficult to work with, Zhou said.

“It’s difficult to control the phase-change memory manufacturing process of ternary alloys such as the traditionally used germanium-antimony-tellurium material. Etching and polishing of the material with chalcogens can change the material’s composition, due to the motion of the tellurium atoms,” explained Zhou.

Zhou and his colleagues turned to a material with just two elements: aluminum and antimony. They studied the material’s phase-changing properties, finding that it’s more thermally stable than the Ge-Sb-Te compound. The researchers discovered that Al50Sb50, in particular, has three distinct levels of resistance — and thus the ability to store three bits of data in a single memory cell, instead of just two. This suggests that this material can be used for multilevel data storage.

“A two-step resistance drop during the crystallization of the material can be used for multilevel data storage (MLS) and, interestingly, three distinct resistance levels are achieved in the phase-change memory cells,” Zhou says. “So the aluminum-antimony material looks promising for use in high-density nonvolatile memory applications because of its good thermal stability and MLS capacity.”

The researchers are now investigating the endurance or reversible electrical switching of the phase-change memory cell with MLS capacity.