Lessons from the “unearthly” behavior of enormous droplets in space may hold the key to improving the reliability of fluid systems for low-gravity spacecraft. 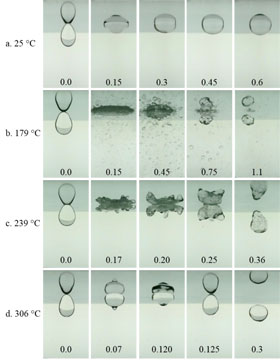 To explore the dynamics of these gigantic droplets, a group of researchers led by Mark Weislogel, a professor within the Department of Mechanical & Materials Engineering at Portland State University in Oregon, is generating and studying them right here on Earth.

How, you ask? As Weislogel and colleagues report this week in Physics of Fluids, from AIP Publishing, they simply form a puddle on a flat nonwetting surface and drop it six stories in a “tower drop.” Items in free fall experience a nearly weightless state — aka low-gravity.

“When gravity is essentially ‘turned off’ in this manner, the puddle tries to form a droplet and kicks itself off the surface in the process … known as puddle jumping,” Weislogel explained.

Large droplets and puddles tend to jump spontaneously from sufficiently hydrophobic surfaces during routine drop tower tests. The group’s simple experimental device — without moving parts — can be used to delve into dynamic droplet phenomena for droplets on the order of 10^4 times larger than their normal terrestrial counterparts.

What lessons can be learned from drop tests?

“Droplets and bubbles are very common and problematic within low-gravity spacecraft, so we need to better understand these to design more reliable systems for water processing, fuel systems, coolants, and habitats,” Weislogel said. “The surprise is that these behaviors can be well predicted, some with 4 orders of magnitude extrapolations of results from terrestrial experiments.”

“Our method provides a unique way of studying other drop impact phenomena for which a simple and cheap droplet shooter is necessary,” he noted. “It doesn’t get simpler than using a puddle on a plate as a method to make droplets fly.”

Weislogel’s group is now using their results to “specify further tests aboard the ISS, where astronauts will perform droplet impact, rupture, splash, and coalescence studies using simple superhydrophobic paddles and very large liquid droplets,” he said. “And we’ll continue our drop tower tests, which is fun work for grad students in fluid mechanics, to explore other effects of fluid properties, wetting conditions, and surface geometry.”