A “battle of pressures” between hydrogen and helium can be used to precisely measure supersonic nozzle pressure, which is critical to the operation of a new kind of accelerator.

WASHINGTON, D.C., Feb. 16, 2016 – A bit of serendipity while carrying out a routine calibration led a researcher at Lawrence Berkeley National Laboratory’s (Berkeley Lab) BELLA Center to discover a new method to measure the pressure of supersonic nozzles. This is a significant breakthrough — with wide-ranging applications that include miniature satellites, lab-on-a-chip devices and laser plasma accelerators.

Monitoring fast jet pressure changes within microscopic nozzles is extremely challenging. But, in the Journal of Applied Physics, from AIP Publishing, a group of researchers report creating a device that greatly simplifies the process.

This device “is a highly miniaturized electron accelerator made of two small slabs of clear sapphire that are each laser machined with half of a custom pattern, and then sandwiched together,” said Nicholas Matlis, the paper’s lead author, who is now a senior scientist at the Deutsche Elektronen Synchrotron in Hamburg, Germany.

It features a long, thin capillary channel — only slightly wider than a human hair. This intersects with a converging/diverging nozzle, which acts as a mini rocket thruster by producing a millimeter-sized supersonic jet of gas.

This combined gas jet and capillary discharge device, developed in the BELLA Center, under the leadership of Wim Leemans, director of the Accelerator Technology and the Applied Physics Division and director of the BELLA Center at Berkeley Lab, was first used in 2011 to produce controlled injection of electron bunches from a laser plasma accelerator — a result published in Nature Physics by Tony Gonsalves and coworkers at Berkeley Lab.

An advanced accelerator is created inside the device that “accelerates electrons with a force thousands of times higher than the world’s largest linear accelerator,” Matlis explained. “We fill it with hydrogen gas, ionize the hydrogen with a high-voltage discharge, and focus into it with a laser pulse a hundred trillion times brighter than the sun’s surface.”

The tricky part, as you can imagine, is control. “At these intensities, lasers interact nonlinearly,” he said. “Small input changes cause large output changes — making it difficult to replicate the performance every time.”

The device’s channel, however, provides a long region with almost perfectly uniform gas pressure and density in which to create the accelerating structure. “When the high-voltage discharge strikes, it converts the gas into a plasma,” Matlis noted. “And the laser pulse makes waves in the plasma, much like a motorboat on a lake. These plasma waves generate enormous electric fields and accelerate electrons that are extracted from the plasma, which then ride the waves like mini surfers.”

The plasma also acts as a guide to keep the laser focused — increasing the accelerator length and allowing it to reach higher energies. “This guiding effect protects the channel from the laser, which otherwise would destroy it,” he said.

Things get even more intriguing by adding the nozzle. “Without it, electrons can only be extracted and accelerated by operating in a high gas density mode that produces larger, more erratic waves,” Matlis pointed out. “The jet of gas expands through the nozzle and introduces a small region of high density that triggers the process of electron capture within the accelerator — making it possible to run the channel in a lower-density mode with steadier waves.”

The jet stabilizes the accelerator’s performance and acts as a “tuning knob” to control it. But a downside was that “because the nozzle is highly pressurized, it must be turned on only in brief pulses — to avoid flooding the vacuum chamber housing the accelerator,” Matlis added.

Pulsing causes the gas filling the nozzle to slosh around the device, which provided an unexpected tenability to the system. The “sloshing” is invisible to the naked eye and occurs within milliseconds, so the group created a custom diagnostic to explore it further.

Plasma, once again, provided a solution. “The ionized atoms within a plasma emit light at well-defined frequencies characteristic to each kind of atom — an emission fingerprint,” said Matlis.

The diagnostic, invented by coworker Anthony Gonsalves, is “essentially a camera that looks at the sapphire block from the side and uses emission light as a flash,” he explained. “The twist was inserting a diffraction grating, which separates colors like a prism, between the camera and device.”

Shooting simultaneous snapshots of the hydrogen (nozzle) and helium (channel) — at the moment of the flash — showed the presence of each gas. “By adjusting the discharge timing compared to the nozzle pulse, we assembled the snapshots into a slow-motion movie that revealed how the gases flowed through the system,” Matlis said.

Working late one evening, operating the nozzle above the critical pressure where helium was known to leak into the channel, Matlis was surprised to see helium show up only in half of the channel. He then realized they’d caught helium in the act of crossing the channel and pushing hydrogen out of its way.

This led to another big discovery: the “battle of pressures” between helium and hydrogen can be used to precisely measure the jet pressure that’s so critical to the operation of the accelerator.

The group’s work is especially important for advanced accelerators, because it has “the potential to provide a whole generation of scientists with the benefits of high-energy accelerators by making them cheaper and easier to build — dramatically accelerating the rate at which crucial science can be done,” Matlis said.

“Our program at Berkeley Lab investigates the science and technology of such miniaturized accelerators,” Leeman added. “Learning how to control, tune, and make them more reliable requires the development of novel diagnostics to provide the eyes and ears of the device. We didn’t have an easy way to optimize the jet and capillary discharge until the technique developed by Matlis. I have no doubt that with optimization methods like this, the dream of compact accelerators will become reality.” 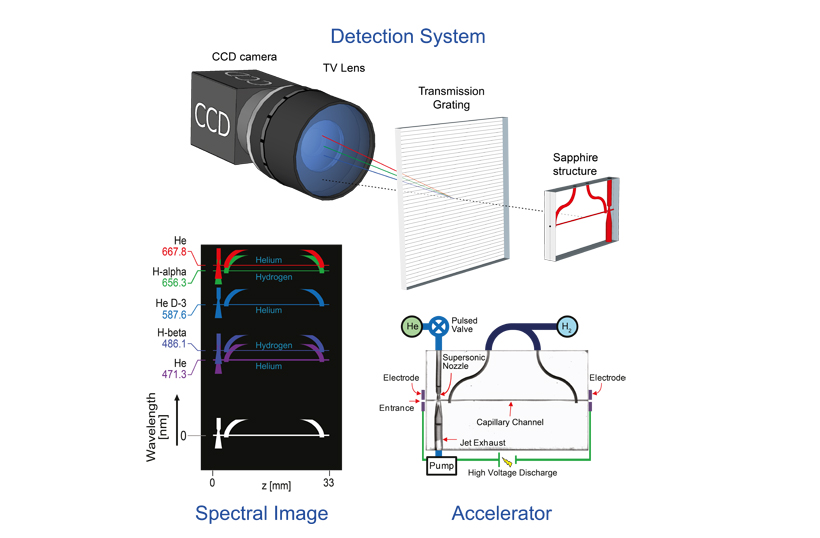