WASHINGTON, D.C., January 2, 2018 — As medicine and pharmacology investigate nanoscale processes, it has become increasingly important to identify and characterize different molecules. Raman spectroscopy, a technique that leverages the scattering of laser light to identify molecules, has a limited capacity to detect molecules in diluted samples because of low signal yield.

A team of researchers from the University of Hyderabad in India has improved molecular detection at low concentration levels by arranging nanoparticles on nanowires to enhance Raman spectroscopy. Surface-enhanced Raman spectroscopy (SERS) uses electromagnetic fields to improve Raman scattering and boost sensitivity in standard dyes such as R6G by more than one billionfold.

The team decorated vertically aligned silicon nanowires with varying densities of silver nanoparticles, utilizing and enhancing the structure’s 3-D shape. Their results, published in the Journal of Applied Physics, from AIP Publishing, show that their device was able to enhance the Raman signals for cytosine protein and ammonium perchlorate by a factor of 100,000.

“The beauty is that we can improve the density of these nanowires using simple chemistry,” said Soma Venugopal Rao, one of the paper’s authors. “If you have a large density of nanowires, you can put more silver nanoparticles into the substrate and can increase the sensitivity of the substrate.”

Applying the necessary nanostructures to SERS devices remains a challenge for the field. Building these structures in three dimensions with silicon nanowires has garnered attention for their higher surface area and superior performance, but silicon nanowires are still expensive to produce.

Instead, the team was able to find a cheaper way to make silicon nanowires and used a technique called electroless etching to make a wide range of nanowires. They “decorated” these wires with silver nanoparticles with variable and controlled densities, which increased the nanowires’ surface area. 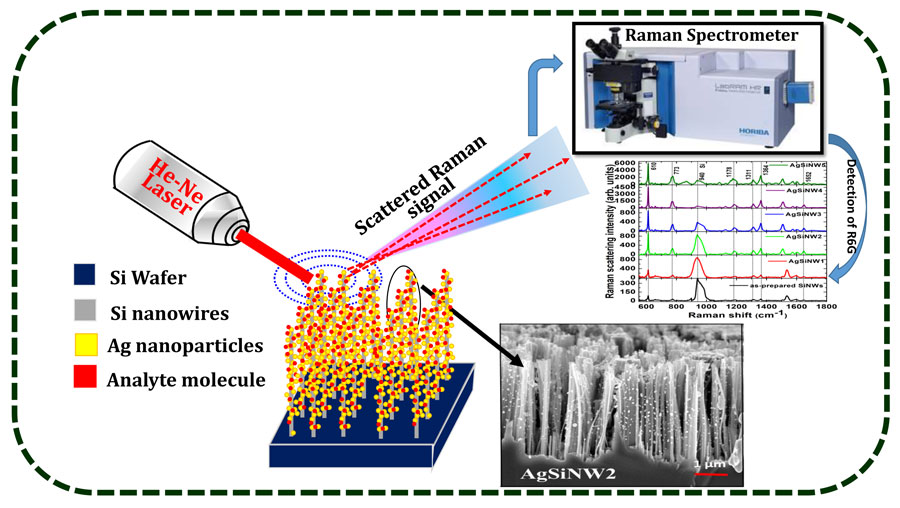 “Optimizing these vertically aligned structures took a lot of time in the beginning,” said Nageswara Rao, another of the paper’s authors. “We increased the surface area and to do this we needed to change the aspect ratio.”

After optimizing their system to detect Rhodamine dye on a nanomolar level, these new substrates the team built enhanced Raman sensitivity by a factor of 10,000 to 100,000. The substrates detected concentrations of cytosine, a nucleotide found in DNA, and ammonium perchlorate, a molecule with potential for detecting explosives, in as dilute concentrations as 50 and 10 micromolar, respectively.

The results have given the team reason to believe that it might soon be possible to detect compounds in concentrations on the scale of nanomolar or even picomolar, Nageswara Rao said. The team’s work has opened several avenues for future research, from experimenting with different nanoparticles such as gold, increasing the sharpness of the nanowires or testing these devices across several types of molecules.