WASHINGTON, D.C., March 10, 2015 — Researchers from Cornell University have synthesized a new thin-film catalyst for use in fuel cells. In a paper published March 10 in the journal APL Materials, from AIP Publishing, the team reports the first-ever epitaxial thin-film growth of Bi2Pt2O7 pyrochlore, which could act as a more effective cathode — a fundamental electrode component of fuel cells from which positive current flows through an external circuit delivering electric power.

“Up to now, research on oxygen catalysts in thin film form for clean-energy applications has been focused on the perovskite-structured oxides and their structural derivatives,” said lead researcher Araceli Gutierrez-Llorente. “The much less studied cubic pyrochlore structure is an appealing alternative to perovskites for such applications as fuel cell cathodes.”

The pyrochlore in question — Bi2Pt2O7 — has previously been successfully synthesized as a nanocrystalline powder. Epitaxial thin films can actually act as more efficient fuel cell catalysts than nanocrystalline powder, but growing Bi2Pt2O7 directly as a film requires oxidizing the platinum metal — a challenging step.

The team used pulsed laser deposition to co-deposit epitaxial δ–Bi2O3 and disordered platinum. Annealing the film in air forced the platinum to oxidize and encouraged the formation of epitaxial Bi2Pt2O7 crystals about 100 nanometers in length. 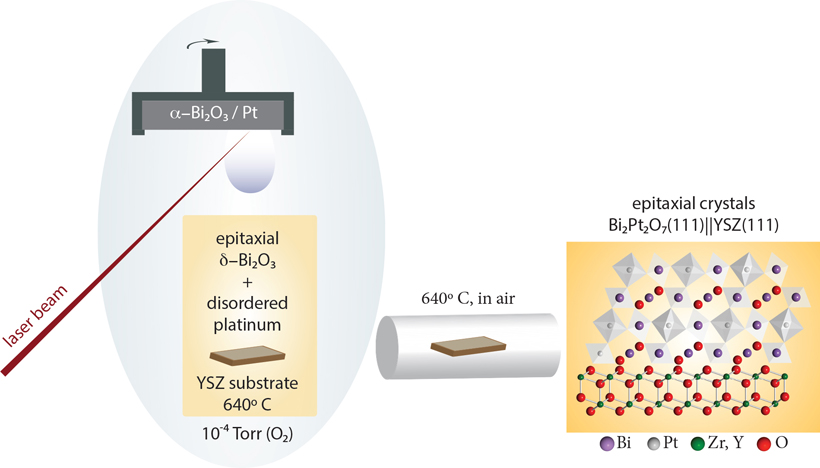 “Our results provide the only currently-known method to form epitaxial Bi2Pt2O7, thought to be one of the most promising oxide catalysts for fuel cell applications,” said Gutierrez-Llorente. The cathode of a solid oxide fuel cell electrochemically reduces oxygen. Bi2PtO7's oxygen-deficient structure makes it an ideal catalyst for the process.

Synthesizing the material as a thin film instead of as a bulk powder opens up new possibilities for fuel cell technology.  "A huge range of surprising properties that cannot be attained in the bulk form can be generated at the interface between complex oxides in thin film form," said Gutierrez-Llorente.