WASHINGTON D.C., June 30, 2014 – When beams with trillions of particles go zipping around at near light speed, there’s bound to be some chaos. Limiting that chaos in particle colliders is crucial for the groundbreaking results such experiments are designed to deliver.

In a special focus issue of the journal Chaos, from AIP Publishing, a physicist at the European Organization for Nuclear Research (CERN) details an important method of detecting and correcting unwanted chaotic behavior in particle colliders. The method is helping accelerator physicists design high-performing, cost-efficient accelerators in an era of constrained science budgets.

The aim of the focus issue is to review, comprehensively, the theory and implementation of existing methods of chaos detection and predictability — as well as to report recent applications of these techniques to different scientific fields. The Focus Issue: Chaos Detection Methods and Predictability is collection of 12 papers representing the wide range of applications, spanning mathematics, physics, astronomy, particle accelerator physics, meteorology and medical research.

Chaos has long bedeviled physicists trying to describe the precise motions of interacting objects. The French mathematician Henri Poincaré discovered the essence of the phenomenon in the late 1800s when he attempted (unsuccessfully) to predict precisely the motions of the solar system’s planets. The same chaotic behavior appears in the crowds of particles traveling inside accelerators like CERN’s Large Hadron Collider.

In these machines, powerful electric and magnetic fields accelerate and guide beams containing trillions of particles. Ideally all particles would travel in orderly orbits around the rings into which they are injected. But in reality, some of the particles spread out around the ring’s center, where they can become chaotic due to their mutual interactions and to defects in the magnetic fields that guide them. Particles that get kicked out of stable orbit can then crash into the collider’s ultra-cold superconducting magnets. If this happens too often, the magnets heat up and the particle beams have to stop, which compromises experiments and creates costly delays.

From previous work in astronomy, Yannis Papaphilippou, a physicist at CERN, knew of a method called “frequency map analysis” that relates the frequencies at which objects oscillate to their chaotic behavior. Over the course of more than a decade, Papaphilippou and his colleagues applied the method to visualize those same frequencies in simulations of particle beams in accelerators. Using such simulations, physicists can design colliders to avoid chaotic beam interactions and keep particles on track. 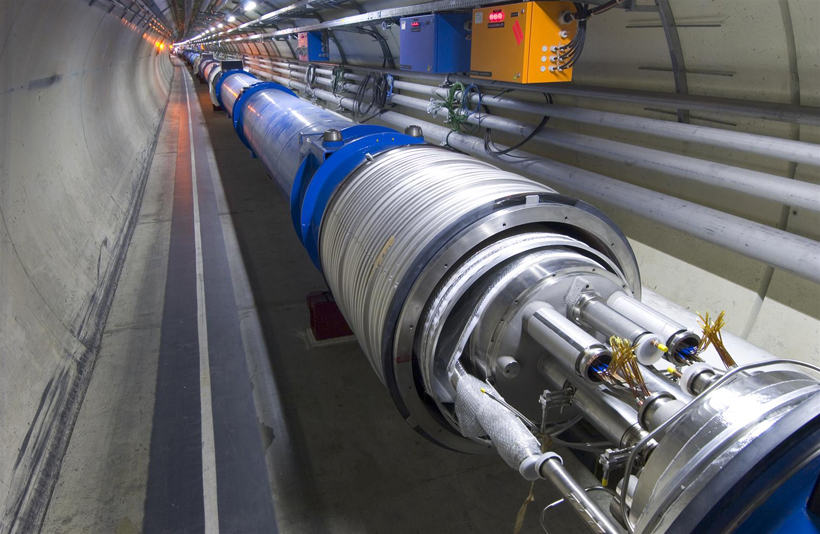 The method has already born fruit. By modeling the extent to which tiny defects in the LHC’s superconducting magnets cause protons traveling in the collider’s rings to behave chaotically, Papaphilippou and his colleagues helped magnet builders design and produce these magnets within strict tolerance limits. The researchers also showed that only half as many correcting magnets were needed as was originally thought.

These findings substantially reduced the collider’s cost and, along with many other efforts, helped streamline the search for the Higgs boson, Papaphilippou said. “All the big discoveries that we’ve had in the LHC…would have been hampered if there was not a very detailed design and evaluation of the nonlinear effects and their correction.”

Frequency map analysis has also helped scientists optimize the Spallation Neutron Source in Oak Ridge, Tenn. As a result of this optimization, the machine set a world record last year for power delivery.

As physicists design new accelerators, Papaphilippou predicts they will use frequency map analysis to achieve high performance at reasonable cost. The Particle Physics Project Prioritization Panel (P5), which advises the U.S. government, identified collider cost as a major concern in a recent report on the future of particle physics.

“Studying these [chaotic] effects from scratch can be a very-cost effective way to build and design these accelerators,” Papaphilippou said.