WASHINGTON, D.C., June 16, 2016 — Modern rockets and their launch vehicles commonly rely on hydrogen-oxygen mixtures as propellant, but this combination is highly explosive. The Challenger space shuttle catastrophe of 1986 is associated with self-ignition of such mixtures.

Risks of explosion are mitigated by the evaporation and burning of droplets within hydrogen-oxygen aerosol mixtures. Inside rocket combustion chambers, the identical evaporation and burning process is used, so a solid understanding of how these processes behave is essential for evaluating the effectiveness and safety of hydrogen-oxygen liquid engines.

In the framework of research motivated by the Challenger disaster, the Applied Physics Group at NASA’s Ames Research Center, in collaboration with researchers from the Supercomputing Division at NASA Ames Research Center, and with physicists from New Jersey Institute of Technology, Newark, and South Dakota School of Mines and Technology, pursued all possible mechanisms of igniting explosions of liquid hydrogen and liquid oxygen mixtures in similar situations. Their analysis revealed new mechanisms, which, in turn, required seeking a deeper understanding of the way hydrogen droplets burn within these mixtures.

Physicists from the Applied Physics Group at NASA’s Ames Research Center now report in Applied Physics Letters, by AIP Publishing, that their earlier findings inspired them to further explore scenarios of evaporation and burning of hydrogen droplets that are induced by infrared radiation from a hot gas that forms when a hydrogen-oxygen mixture combusts. 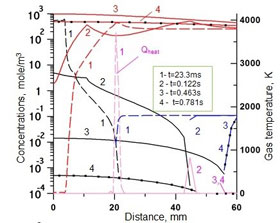 The main physical processes at play in this type of burning are an explosive — very quick — evaporation of liquid hydrogen droplets in response to radiative heating from the hot ambient gas, followed by a slow burning of the gaseous hydrogen.

“We were quite surprised by the extreme time-scale separation,” said Michael Khasin, a senior researcher and deputy lead of the Applied Physics Group at NASA Ames Research Group. “These are the processes that were likely responsible for the Challenger explosion, and they are expected to occur within the liquid engine combustion chamber of rockets using liquid hydrogen-oxygen fuel.”

Khasin and colleagues also made the intriguing discovery that different mechanisms of burning occur, depending on the size of the hydrogen droplets.

“One of the applications for this finding is that it now enables optimization of spray systems within combustion engines of liquid hydrogen-oxygen-powered rockets,” Khasin said.

A broad range of problems involving the evaporation of cryogenic fluid droplets and burning will also benefit from the extremely accurate numerical method developed by the group during the course of this work.

Next, the group plans to explore “different scenarios of the evaporation of hydrogen droplets while spray cooling the cryogenic tank in microgravity conditions,” Khasin said. “This process is important for safe and efficient cryogenic fuel management in deep space missions.”