Innovative device could lead to the development of new sensing technologies

WASHINGTON, D.C., October 30, 2017 — In the late 18th century, Ernst Chladni, a scientist and musician, discovered that the vibrations of a rigid plate could be visualized by covering it with a thin layer of sand and drawing a bow across its edge. With the bow movement, the sand bounces and shifts, collecting along the nodal lines of the vibration. Chladni’s discovery of these patterns earned him the nickname, “father of acoustics.” His discovery is still used in the design and construction of acoustic instruments, such as guitars and violins.

Recently, investigators have discovered a similar effect with much smaller vibrating objects excited by light waves. When laser light is used to drive the motion of a thin, rigid membrane, it plays the role of the bow in Chladni’s original experiment and the membrane vibrates in resonance with the light. The resulting patterns can be visualized through an array of quantum dots (QDs), where these tiny structures emit light at a frequency that responds to movement. The advance is reported this week in a cover article of Applied Physics Letters, by AIP Publishing.

In addition to being a modern take on an old phenomenon, the new discovery could lead to the development of sensing devices as well as methods for controlling the emission characteristics of QDs. Since the light frequency emitted by the QDs is correlated with the movement of the underlying membrane, new devices for sensing motion, such as accelerometers, can be envisioned. A reverse application is also possible since the motion of the underlying membrane can be used to control the frequency of light emitted by the QDs.

The tiny devices in the work reported here consist of a 180-nanometer thick slice of semiconductor, suspended like a trampoline above a solid substrate. An array of QDs, analogous to the sand in the acoustic example, are embedded in the slice, whose thickness is less than one-tenth of one percent that of a human hair.

A second probe laser is used to visualize the resulting resonances. The QDs absorb the probe light and emit a second light pulse in response, which is picked up by a detector and routed to a display. The resulting patterns are remarkably like those visualized in Chladni’s original acoustic experiment, even though the new device is driven entirely by light.

One possible application of this discovery, according to Sam Carter of the Naval Research Lab who is one of the paper’s authors, is to sense subtle forces produced by nearby dense objects. “Concealed nuclear materials could be detectable,” he said, “since dense materials like lead are used to shield the devices.”

The highly dense shielding needed for nuclear materials causes small gravitational anomalies and tiny movements that might be detectable by a device based on the principle discovered here. The investigators plan to continue their work by looking at electronic spin. It is hoped that techniques to measure the effect on spin will increase the sensitivity of the devices. 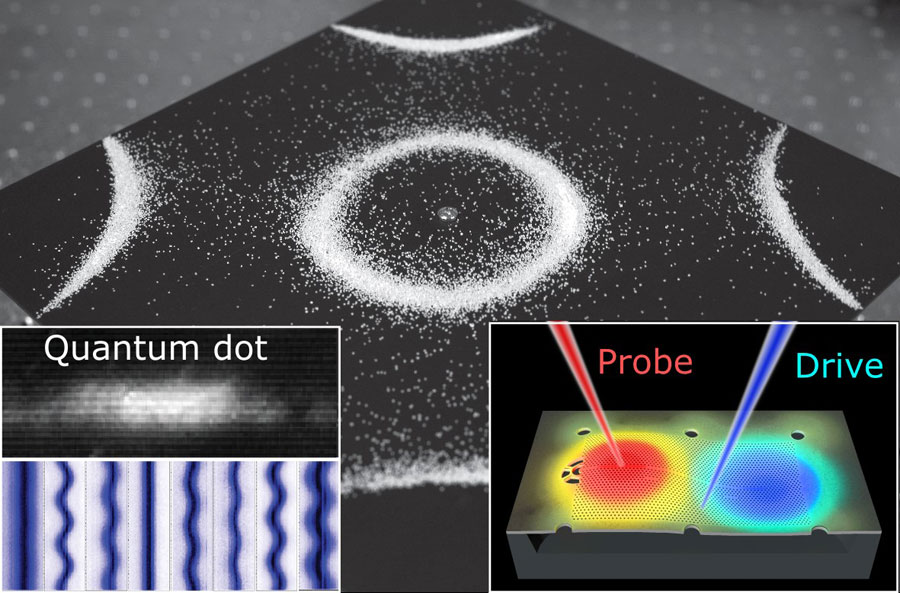