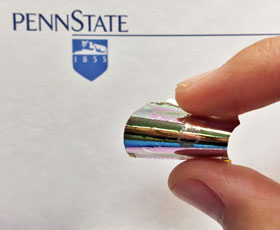 WASHINGTON, D.C., October 25, 2017 — Piezoelectric materials are used for applications ranging from the spark igniter in barbeque grills to the transducers needed by medical ultrasound imaging. Thin-film piezoelectrics, with dimensions on the scale of micrometers or smaller, offer potential for new applications where smaller dimensions or a lower voltage operation are required.

Researchers at Pennsylvania State University have demonstrated a new technique for making piezoelectric microelectromechanical systems (MEMS) by connecting a sample of lead zirconate titanate (PZT) piezoelectric thin films to flexible polymer substrates. Doctoral candidate Tianning Liu and her co-authors report their results this week in the Journal of Applied Physics, from AIP Publishing.

“There’s a rich history of work on piezoelectric thin films, but films on rigid substrates have limitations that come from the substrate,” said Thomas N. Jackson, a professor at Penn State and one of the paper’s authors. “This work opens up new areas for thin-film piezoelectrics that reduce the dependence on the substrate.”

The researchers grew polycrystalline PZT thin films on a silicon substrate with a zinc oxide release layer, to which they added a thin layer of polyimide. They then used acetic acid to etch away the zinc oxide, releasing the 1-micrometer thick PZT film with the polyimide layer from the silicon substrate. The PZT film on polyimide is flexible while possessing enhanced material properties compared to the films grown on rigid substrates.

Piezoelectric devices rely on the ability of some substances like PZT to generate electric charges when physically deformed, or inversely to deform when an electric field is applied to them. Growing high-quality PZT films, however, typically requires temperatures in excess of 650 degrees Celsius, almost 300 degrees hotter than what polyimide is able to withstand without degrading.

“For example, if you’re looking at putting an ultrasound transducer in a catheter, a PZT film on a polymer substrate would allow you to wrap the transducer around the circumference of the catheter,” Liu said. “This could allow for significant miniaturization, and should provide more information for the clinician.”

The performance of many piezoelectric thin films has been limited by substrate clamping, a phenomenon in which the rigid substrate constrains the movement of the piezoelectric material’s domain walls and degrades its properties. Some work has been done crystallizing PZT at temperatures that are compatible with polymeric materials, for example using laser crystallization, but results thus far have led to porous thin films and inferior material properties.

The released thin films on polyimide that the researchers developed had a 45 percent increase in remanent polarization over silicon substrate controls, indicating a substantial mitigation in substrate clamping and improved performance. Even then, Liu said, much work remains before thin-film MEMS devices can compete with bulk piezoelectric systems.

“There’s still a big gap between putting PZT on thin film and bulk,” she said. “It’s not as big as between bulk and substrate, but there are also things like more defects that contribute to the lower response of the thin-film materials.”