WASHINGTON, D.C., April 12, 2016 – HIV and hepatitis C virus (HCV) infections are among the leading causes of death worldwide, and an estimated one-third of people with HIV/AIDS are co-infected with HCV. This makes them more likely to suffer worse outcomes and poses severe public health challenges within Kenya and other African countries as well.

While rapid point-of-care tests for diagnosing sexually transmitted infections are commercially available today and used within developing regions, they tend not to be affordable or accurately quantify the concentrations of the disease markers within a sample, which help to determine the stage of the infection.

But this may soon change. A group of researchers at McGill University in Montreal has recently developed a portable, paper-based electrochemical platform with multiplexing and telemedicine capabilities that may enable low-cost, point-of-care diagnosis of HIV and HCV co-infections within serum samples.

The researchers discuss the design and testing of their device this week in Biomicrofluidics, from AIP Publishing. When assessing the device’s sensitivity with spiked mouse serum samples, the researchers were able to detect HIV and HCV antibodies at 300 picograms per mL and 750 picograms per mL, respectively – values lower than currently existing HIV and HCV antibody tests.

The group’s work to develop HIV and HCV antibody tests was initiated by a Star in Global Health Award granted by Grand Challenge Canada.

How Does the Diagnosis Work?

“Our experimental setup consists of a paper device with eight electrochemical biosensors — for handy, one-time, disposable use — and a custom-made, handheld electrochemical reader, or potentiostat, to keep costs as low as possible,” explained Xinyu Liu, an assistant professor in the Department of Mechanical Engineering at McGill University. “It enables eight [simultaneous tests], four for HIV antibodies, and four for HCV antibodies,” Liu said, adding that makes the test broader than existing HIV and HCV point-of-care tests.

To run a test, the paper device is simply inserted into a slot on the potentiostat, and microliter drops of serum sample and reagents are added to each biosensor. Pressing a button triggers the electrochemical measurements.

The device is also compatible with existing internet-based and mobile network-based e-health systems. Data from the eight tests can be directly displayed on an LCD screen of the potentiostat or transmitted to a smartphone or personal computer, and then to a remote site — a centralized laboratory or hospital — via the mobile network or Internet for remote diagnoses. 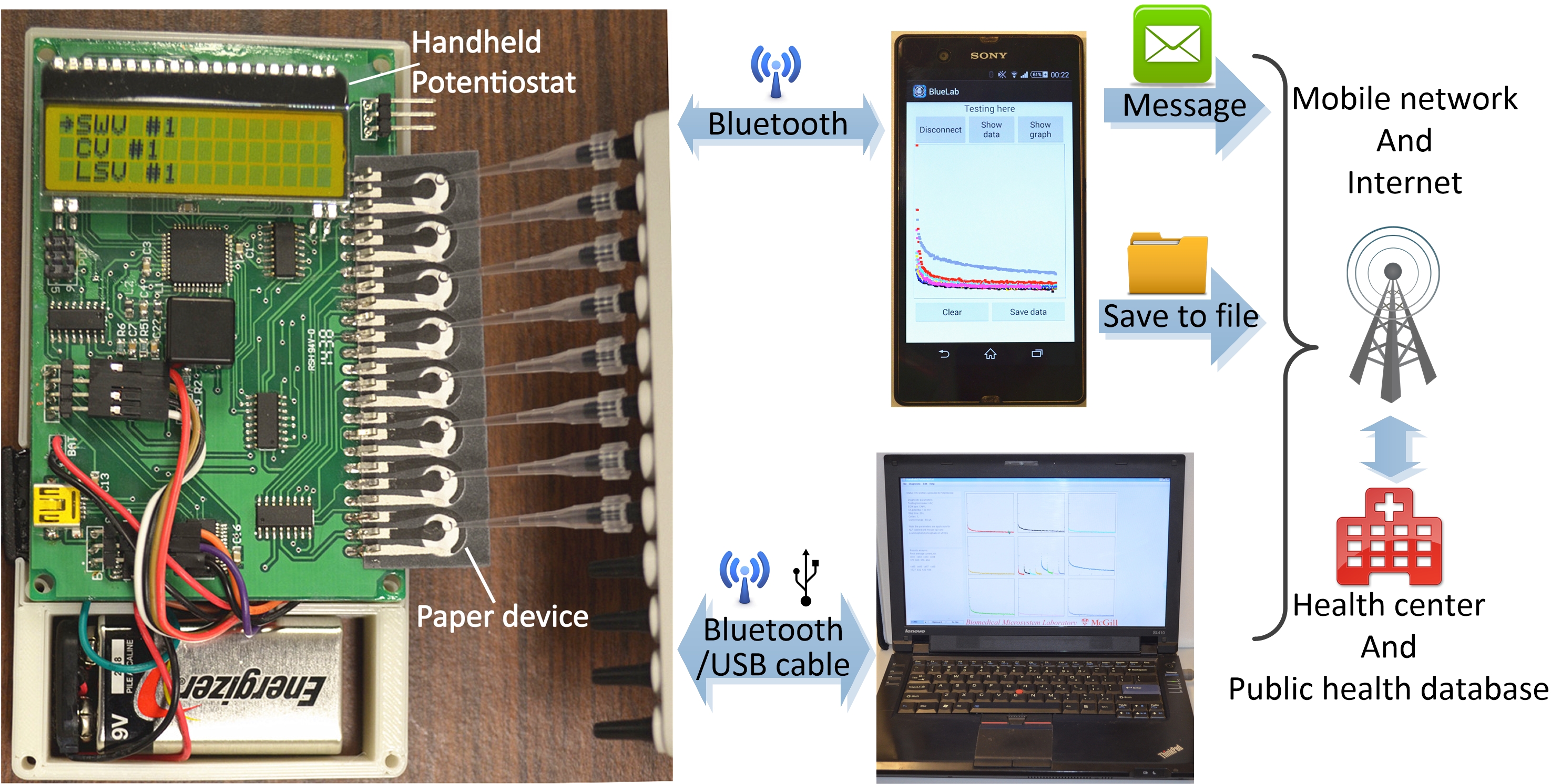 When the researchers explored a potential cross-reaction between the HIV and HCV antibody tests, they found “no significant interference of the two tests,” Liu noted. “These results demonstrate that our diagnostic platform shows great potential for diagnosing HIV/HCV co-infections in real patient samples.”

The main advantage offered by the platform is its ability to run eight test for HIV and HCV in parallel within 20 minutes with high accuracy, sensitivity and specificity. Beyond this, the platform’s “handheld multiplexing potentiostat makes the entire electrochemical platform portable and significantly improves its adaptability to point-of-care applications,” Liu explained.

And, given the wide applicability of electrochemical detection to many types of biomolecules, the platform “can be readily extended to the detection of other disease markers such as proteins, metabolites, ions, and nucleic acids,” Liu added.

The next step for the researchers is to continue fine-tuning the device for practical use. “We’ll explore the stability of the paper device during long-term storage, and then begin real patient sample testing in Canada and Kenya,” said Liu. “Our long-term goal is to further extend the functionality of this diagnostic platform by targeting other molecular disease markers.”