Surprising Discovery in Germany, as Researchers Find New Way to Probe Fundamental Properties of Solids by Doubling Up on Instruments

WASHINGTON D.C. Feb. 11, 2014 — Shoot a powerful beam of light or particles at certain special materials and you will liberate electrons — pairs of them — a phenomenon known as “electron pair emission, ” which can reveal fundamental properties of the solid and reveal information necessary to design novel materials for future applications.

Measuring electron pair emission has always been difficult, however, because they were traditionally done using highly expensive synchrotron light sources, which are available in only a few laboratories worldwide. Nobody has found a way to routinely measure electron pair interactions on a standard lab bench.

Now a team led by researchers at the Max Planck Institute of Microstructure Physics in Halle, Germany has done just that. They developed a new way to measure the emission of electron pairs directly by combining two common laboratory instruments called time of flight mass spectrometers, a setup they describe in the journal Applied Physics Letters, which is produced by AIP Publishing.

“Einstein received the Nobel Prize for his explanation of the photoelectric effect, which was published in 1905. So the possibility that photon energy can be transferred to more than one electron is anticipated in our work,” explained Michael Huth, a postdoctoral researcher at the Max Planck Institute of Microstructure Physics. “The existence of this process provides direct access to the electron correlation strength.” 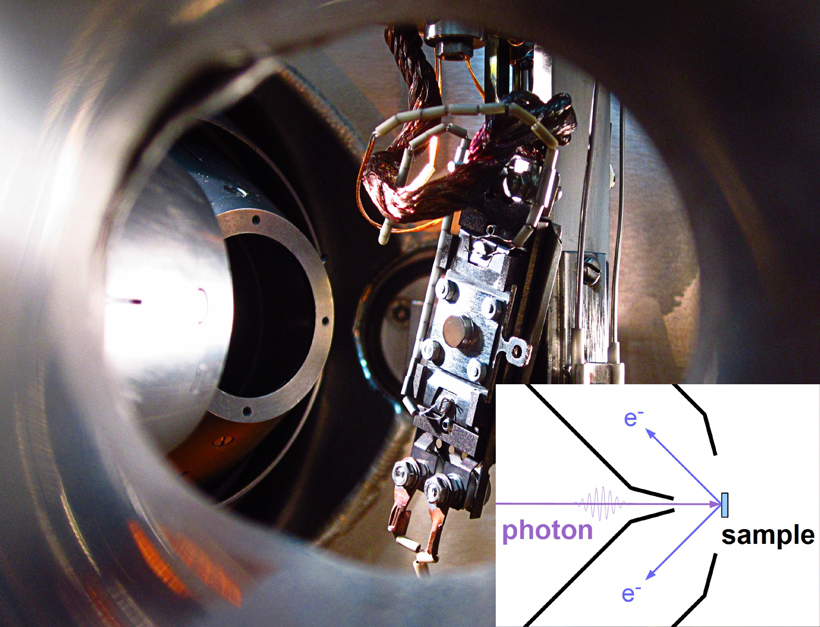 An electron pair is “excited” by a single photon; from an experimental point of view, this requires the combination of a suitable light source and electron spectrometers.

Developing such a setup involved “a significant effort,” according to Huth. Comically, the team dubbed their setup’s photoemission chamber “Hydra,” because its two time-of-flight spectrometers give the chamber an appearance of having multiple heads.

As a proof-of-principle experiment, the team chose to investigate nickel oxide (NiO), which, in theory, should have strong electron correlation effects. While measuring the energy distribution, they were surprised to discover that in contrast to the metal, the energy sum of the electron pair shows no prominent features.

What’s the significance? “Our observation is that metals and nickel oxide behave very differently,” Huth said. “This implies that our technique allows us to quantify the electron correlation strength.”

Quantifying a solid-state material’s electron correlation strength is important because it allows researchers to characterize its useful properties, including superconductivity, metal-insulator transition and long-range magnetic ordering. “Our experimental data will guide theory toward understanding the fundamental properties of solids, and one day help to design novel functional materials,” Huth noted.

Next, the researchers’ sights are set on exploring different materials to gain a more complete picture of electron correlation by running experiments at different photon energies. “We also plan to optimize the efficiency and stability of our new setup for ongoing experiments,” Huth said.