A simple mechanism can control the swimming direction of magnetotactic bacteria -- a group of bacteria that orient along the earth's magnetic field and are of interest to scientists studying geology, environmental change and more

WASHINGTON, D.C., September 15, 2015 — In the Marvel Comics universe, Professor Xavier and the X-Men are only able to fend off their archrival Magneto, the magnetic mutant with the ability to control metals, once they truly understand the scope of the villain’s powers. To better understand the behavior of the microbial world’s Magnetos — the magnetically influenced water-dwellers known as magnetotactic bacteria — three researchers from Europe and Russia have developed a new tool that allows these unique microscopic species to be studied more easily, especially in their natural environment.

The researchers describe their work in the journal Review of Scientific Instruments, from AIP Publishing.

Magnetotactic bacteria can be found in both freshwater and marine environments. What makes them magnetic is that they produce chains of organelles (compartments located inside the bacterial cell wall) called magnetosomes that contain nanometer-size iron crystals. The earth’s magnetic field puts a torque on the magnetosome chains, rotating the bacteria in which they reside. This causes the bacteria to swim in the direction of the applied external force.

“In other words, magnetotactic bacteria act as self-propelled compass needles,” said Pieter Smid, a geophysicist with Ludwig-Maximilians-Universität in Munich, Germany and the University of Nottingham in the United Kingdom. “Their magnetic abilities help them find a chemically suitable habitat in which to thrive.”

Smid said that magnetotactic bacteria are important creatures to study because they can provide scientific insight into how our planet’s sedimentary layers were formed. “When these microbes die in aqueous sediments, their magnetosomes are conserved in the rocks formed from that sediment,” he explained. “The magnetic properties are permanently imparted to the rock which, in turn, serves as a record of changes in the earth’s magnetic fields and provides us with a timeline for the rock’s creation.”

Additionally, Smid said that magnetotactic bacteria may one day be used as indicators of impending environmental and climate change, or as microscopic transport systems for nanoparticles.

Despite the interest from scientists, studying magnetotactic bacteria hasn’t proved easy, especially in the field.

“In the past, two pairs of electromagnetic coils were wrapped around a microscope to control the swimming direction of the magnetotactic bacteria,” Smid said. “These multicomponent systems required large power supplies, complex electromagnetic frameworks, much electronic circuitry and control software — not the kind of mechanism that’s suitable for outside-the-lab experiments.”

Smid and colleagues solved these problems by designing a simple mechanism using a single rotating permanent magnet. Their device resembles the inner workings of a watch, with the magnet positioned atop a concentric series of five gears turning in sync to create a strictly controlled and easily manipulated rotating magnetic field. 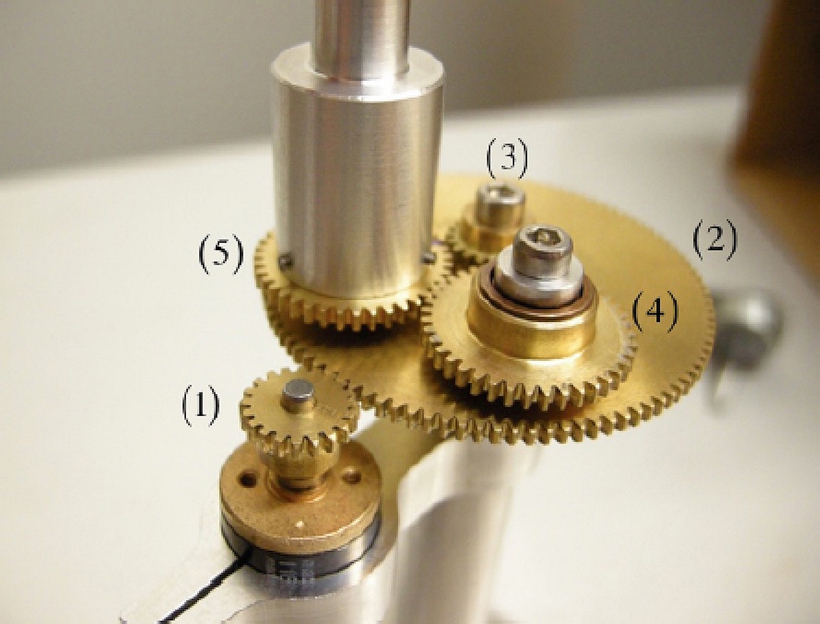 “The permanent magnet in our mechanism moves along a circular trajectory while rotating around its dipole axis [the center point between the north and south poles of the magnet],” Smid said. “As the magnet turns, it generates a magnetic field of constant amplitude [intensity] and when we place this next to a microscope, it drives the magnetotactic bacteria on the scope to swim in a circular motion and keeps them in view.”

By measuring the radius of each circle the magnetotactic bacteria travel as the magnet rotates faster and faster, the researchers can accurately determine swimming speed. This is a key to better understanding how the bacteria move in a magnetic field and how those dynamics might be used in future applications.

When the frequency of the magnetic field rotation increases to the point that the bacteria will no longer follow the generated field, they break out of their circular swimming pattern. “This specific frequency, known as the ‘escape frequency,’ can be used to calculate a bacterium’s magnetic moment — the measure of its ability to align with a magnetic field,” Smid explained.

The success of the simple concentric rotating magnet device reported in the Review of Scientific Instruments paper was unexpected, Smid said. “We didn’t believe that we could produce a rotating magnetic field of constant amplitude, but the results showed that our system does what conventional electromagnets can do with less equipment, lower cost and most importantly, more flexibility, since it can be adapted to many light microscopes and taken into the field,” he said.

Next up for the researchers will be testing their new tool on different species of magnetotactic bacteria in different environments. They hope to begin answering questions such as how populations respond and adapt to a wide range of magnetic fields, and how the magnetic properties of these special microbes can best be put to use. 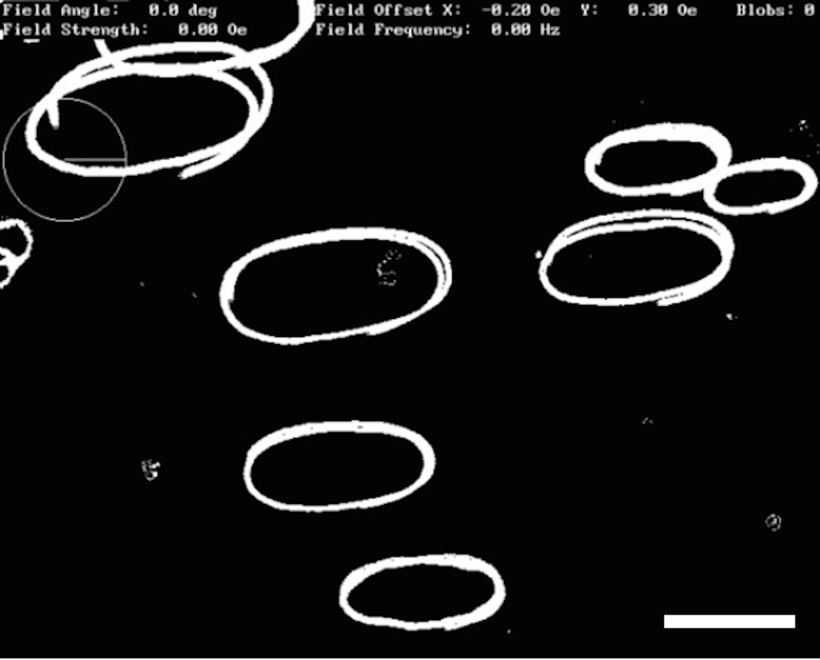