Call it a split personality: water-attracting spots on water-repelling surfaces can prevent ice formation at 6 degrees below freezing for more than three hours

WASHINGTON, D.C., October 6, 2015 – If you’ve ever waited on an airport runway for your plane to be de-iced, had to remove all your food so the freezer could defrost, or arrived late to work because you had to scrape the sheet of ice off your car windshield, you know that ice can cause major headaches.

“People intuitively know that frost can be bad,” said Amy Betz, a professor in mechanical engineering at Kansas State University. Betz and her colleagues have created a surface that can significantly delay frost formation, even at temperatures of down to 6 degrees Celsius below freezing. The surface is biphilic, meaning it repels water in some areas and attracts it in others. The researchers describe their results in a paper in the journal Applied Physics Letters, from AIP Publishing.

Previous research by other groups has focused mainly on the frost-preventing properties of superhydrophobic (ultra water-repelling) surfaces. In general, the surfaces work by repelling water droplets before they have time to freeze. There is little research, however, on surfaces that mix hydrophobic and hydrophilic areas.

Betz had experience working with such biphilic surfaces for boiling experiments — in 2012 she and her colleagues found that superhydrophilic surfaces with superhydrophobic hexaganol spots resulted in the most efficient transfer of heat during boiling, compared to surfaces with uniform wettability. She wondered how similar “split personality” surfaces would affect ice formation.

Betz, along with fellow Kansas State University mechanical engineering professor Melanie Derby, and students Alexander Van Dyke and Diane Collard, created three different biphilic surface patterns. Each surface consisted of hydrophilic circles on a hydrophobic background. For two of the surfaces, the circles were 200 micrometers across, and either arranged in an even grid, like the dots on the 4-side of dice, or staggered, like the dots on the 5-side of dice. The third surface consisted of smaller, 25 micrometer-sized circles in an even grid. The researchers also made a purely hydrophobic surface and a purely hydrophilic surface.

The team then tested the surfaces by placing them in a chamber at a range of set temperatures and humidities and waiting for three hours to see if frost formed. Ice crystals appeared at the warmest temperatures for the hydrophilic surface — at about 1-2 degrees Celsius below freezing. The hydrophobic surface decreased the temperature required for freezing in the three-hour time frame by about an additional 1 degree Celsius. But the biphilic surfaces had the most success. At 60 percent relative humidity, all three biphilic surfaces required temperatures around 6 degrees below freezing before ice would form in the three-hour window. 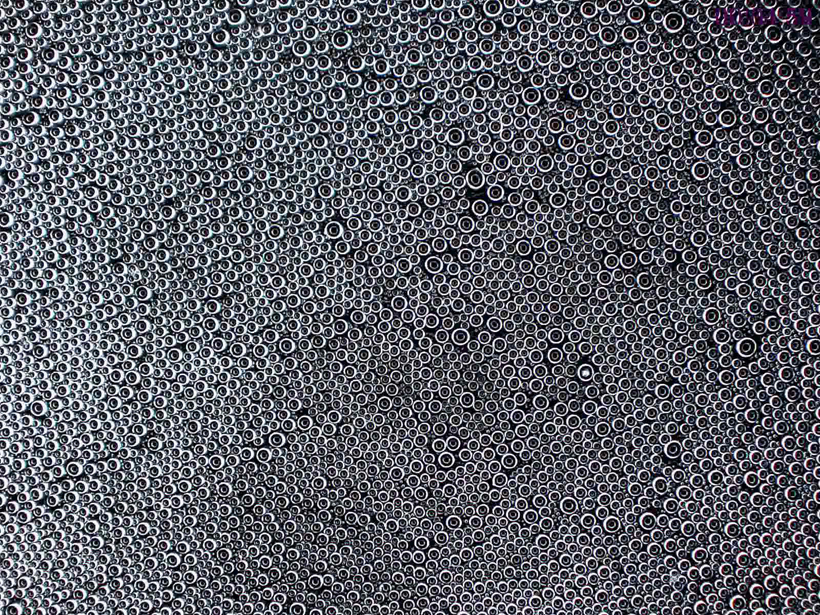 The researchers attribute the frost-busting properties to the unusual condensation and coalescence dynamics on the biphilic surfaces. Small droplets about 5 micrometers in diameter initially formed on both the hydrophobic and hydrophilic areas, Betz said, but as the droplets grew, they merged with other droplets, and became confined to the hydrophilic spots. Each time a droplet merged with another droplet it released energy held by surface tension, because the surface area of the new droplet was smaller than the combined surface area of the two droplets prior to merging. The new droplet was also larger, which increased the energy removal needed to freeze it. Both factors delayed the freezing of the droplets, the researchers said.

The researchers believe they can change the biphilic pattern to take maximum advantage of the frost-delay that coalescing droplets provide. “We are currently working on a star shape that should maximize coalescence,” Betz said. The sizes and shapes of the surfaces could also be tuned to resist frost best in particular temperature and humidity environments.

The researchers made the surfaces from silicon wafers and a thin coating of a hydrophobic chemical commonly used in the semiconductor industry. The surfaces were strong enough to withstand hundreds of hours of testing over two years, but Betz said that more robust materials would likely be used for commercial applications of frost resistant surfaces. She said airplane wings are one obvious application, but there are many others, including in refrigerators, air conditioners, and air-cooled condensers in power plants.

“It’s hot and humid in Kansas and the summer I first moved here a lot of people were having problems with their air conditioning units freezing up,” Betz said, referring to a common problem where insufficient airflow or low refrigerant levels cause ice to build up on the AC units, forcing homeowners to turn the units off to defrost them. “Maybe a biphilic surface could help.”

This work was supported by the National Science Foundation.

Droplet coalescence and freezing on hydrophilic, hydrophobic, and biphilic surfaces