WASHINGTON, D.C., April 25, 2017 — One key goal for renewable energy in the United States is to promote the continued adoption of solar photovoltaic (PV) systems to reduce greenhouse gas emissions and create a clean energy workforce.

Federal and state governments are working to strengthen U.S. solar manufacturing to help reduce installation costs, for example. But successfully promoting green energy in the long run will require a better understanding of the decision-making process behind adopting renewable technologies such as solar PV systems.

This inspired a group of researchers at the University of California, Riverside, to explore the factors driving commercial customers in Southern California, both large and small, to purchase and install solar PV systems. As the group reports this week in the Journal of Renewable and Sustainable Energy, from AIP Publishing, they built a model for commercial solar PV adoption to quantify the impact of government incentives and solar PV costs.

“Gaining a good understanding of the driving factors will help us to evaluate current energy policies and to develop future policies,” said Wenyu Wang, a doctoral student in the Department of Electrical and Computer Engineering. “Our work focuses on commercial customers because of the huge role they play in energy consumption.”

“Our model is built on top of a framework called a ‘Bass diffusion model,’ which is typically used to describe the adoption behavior of technology products within a market,” Wang said. “To do this, we collected historical solar PV adoption data within Southern California and calibrated our model with historical data.” 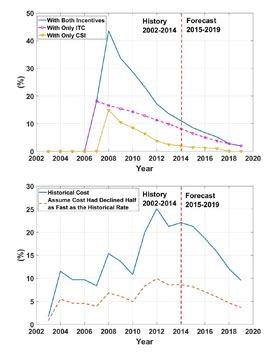 “Our work provides a way to quantify the impact of government incentives and the solar PV cost on solar PV adoption,” Wang said. “This can help the state and federal government to evaluate the effects of their policies and to provide a better solar PV adoption forecast to electric utility companies.”

When the group applied their model to Southern California, they discovered that it’s more difficult for commercial users to install solar PV systems in their buildings than residential customers.

“A greater percentage of commercial customers occupy leased buildings or share buildings with other businesses,” Wang said. “In these situations, it becomes more difficult to ‘go solar’ because of a need to split the costs and benefits of solar PV systems.”

And while it may be easy to assume that government incentives and decreasing costs are the main forces driving solar PV adoptions, “we found that they have more impact on larger commercial customers than smaller ones,” Wang said. “Another important finding is that smaller businesses encounter more hurdles involved in adopting solar PV systems than larger businesses, a phenomenon known as ‘small commercial solar gap.’”

This finding is just one example of how this model can be used as a tool to positively impact renewable energy adoption.

“Our model can help the government evaluate the impacts of energy policies on the solar PV market and to forecast the future solar adoptions,” Wang said. “It can be a useful tool for policymakers to further boost the adoption of solar PV systems.”

According to Wang, this modeling also helps grid planners to forecast the amount of solar energy demand so that they can update plans with more accurate solar PV adoption forecasts.

The next iteration of their research will look at what appears to be a growing trend in the market of solar technology leasing, and what implications that might have.

This research was supported by a grant from Southern California Edison.

A model for commercial adoption of photovoltaic systems in California