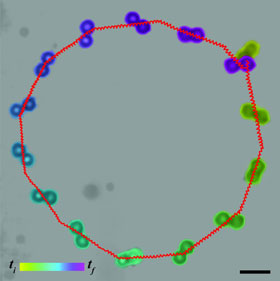 WASHINGTON, D.C., July 19, 2016 — When scaling down robots to the micrometer scale for tiny tasks such as incising tissue and puncturing retinal veins, minimalism is key. To make smaller, simpler microrobots, researchers at Drexel University have developed a fabrication method which utilizes the minimum geometric requirements for fluid motion — consisting of just two conjoined microparticles coated with bits of magnetic debris.

When a microrobot is exposed to an external magnetic field — the offboard power source, given the difficulty in shrinking batteries to the size of bacteria — it begins to spin and move in a manner similar to bacterial flagella, courtesy of the iron oxide debris.

“Such simple microswimmers circumvent the technical limitations of fabrication technologies, which effectively allow for a focus on the functionalization of microswimmers,” said MinJun Kim, a professor in the Mechanical Engineering and Mechanics Department at Drexel University in Philadelphia. “Furthermore, the use of particles to create these microswimmers will synergize well with other micro- and nanoparticle based technologies such as nanoparticle drug delivery systems.”

Kim and his colleagues discuss their work this week in Applied Physics Letters, from AIP Publishing. Previous work for the researchers had included a paper on the minimal geometrical requirements to fabricate microswimmers that operate at low Reynolds numbers, a ratio of forces that determines the degree of turbulence for fluids and objects under flow conditions.

The researchers fabricated their particle-based microswimmers through chemical conjugation and magnetic self-assembly. To bind the four micrometer-wide magnetic beads into pairs, Kim and his colleagues prepared two batches separately coated with avidin and biotin proteins, which create one of the strongest naturally found non-covalent bonds. They then exposed these conjoined pairs to one-micrometer iron oxide flakes, which became magnetically adhered to the microsphere surfaces.

This stands in contrast to many existing methods of fabrication in which microrobots are fabricated using specialized chemistry and lithography methods, some of which involve molds and elastomeric materials.

After fabrication, the researchers placed samples of the microswimmers inside a simple chamber fabricated from PDMS, a common silicon-based organic polymer. The chamber was then placed inside an electromagnetic coil system that was mounted onto a microscope with external controls to manipulate the strength, rotation frequency and direction of the magnetic field. These allowed for control over the swimming motion, speed and heading direction of the microswimmers.

“Our results demonstrated successful control over the microswimmers’ swimming speed and direction,” Kim said. “The significance of the results is the demonstration that such extremely simple microswimmers can be fully controllable at low Reynolds number.”

Future work for Kim’s lab — which has recently been relocated to Southern Methodist University in Dallas, Texas — will include replacing the magnetic debris with nanoparticles for a systematic investigation of particle size, ultimately testing the range of applications of the robots.